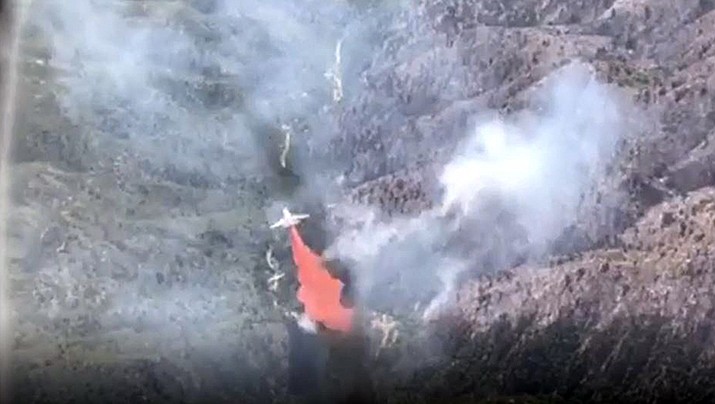 Increases in relative humidity and cloud cover are contributing to a gradual deescalation of the Cellar Fire, which was at about 7,512 acres and 47% contained Monday morning, July 22, the Forest Service reported.

The fire, which started about 16 miles south of Prescott on July 14, caused by lightning, is burning on the Prescott National Forest in Ponderosa pine, brush, grass and chaparral. Total resources as of Monday morning include 562 personnel - made up of seven Hotshot crews, four Type 2 IA crews, two Type 2 crews, two dozers and 13 fire engines.

Another change Monday: The Yavapai County Sheriff's Office issued an updated Code RED - "All READY notifications for the communities of Walker, Groom Creek, Wolf Creek, Potato Patch and Indian Creek have been lifted."

However, Crown King and Pine Flat remain under a "READY" notice.

The fire's size has remained static for the last couple of days and containment is improving. Officials expect they'll be reducing the amount of fire personnel assigned to the blaze over the next few days.

Containment along the northwest flank of the fire increased Sunday, and crews have transitioned out of this area. It will continue to be monitored by aerial resources.

The Blind Indian Creek drainage area on the east side of the fire still shows hot spots. Helicopters dropped water to cool the area, and firefighters continue to monitor this area closely.

Firefighters awareness remains high as thunderstorms are expected early in the week. Incoming storms predicted for early this week bring lighting along with moisture. The forecast calls for a 20% chance of rain today and 50% on Tuesday. Firefighters stand ready to engage in the event of a new start.

A recording of Daily Operations Video Update is available to view on the Prescott National Forest Facebook page at https://www.facebook.com/PrescottNF/. No Facebook account is required to view.

"While fire activity is minimal, the potential for active fire behavior still exists," wrote Debbie Maneely of Prescott National Forest on Sunday morning. "Due to an increase in mid-level moisture, a few cumulus buildups are likely over the mountainous terrain, but no rain is expected (Sunday) over the fire."

Firefighters are beginning suppression repair, Maneely said. The objective of suppression repair is to repair damages to resources, land, and facilities caused by the fire suppression activities, and to return the affected area to pre-wildfire management activity conditions as practical. Chipping of brush vegetation removed by masticators will begin at Palace Station south along FS Road 52 (Senator Highway).

Firefighters continue to actively engage in fully suppressing the fire where they can do so safely and effectively, she said. This includes protecting values at risk including private property and infrastructure in and around Pine Flats, Potato Patch, Wolf Creek, Groom Creek, Indian Creek Walker, and Crown King.

A recording of Daily Operations Video Update and Saturday’s Crown King Community Meeting are available to view on Facebook at https://www.facebook.com/PrescottNF/. No Facebook account is required to view.

Watch dCourier.com and The Daily Courier for updates.