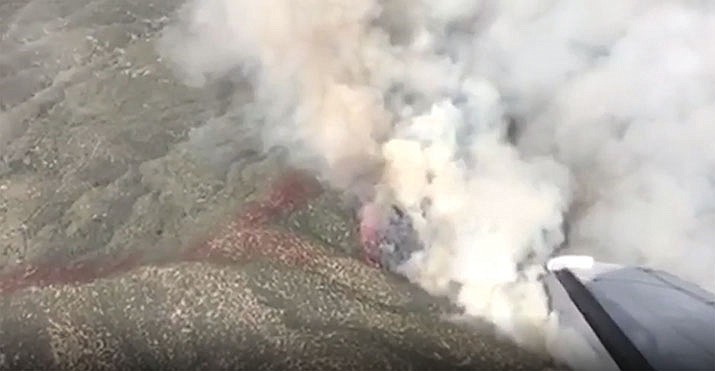 A freeze frame of air attack footage of the northeast corner of the Cellar Fire on July 18. (USFS/Courtesy)

Prescott-area residents are begging for rain as firefighters work to contain the Cellar Fire, which started a week ago with 5 acres ignited after a lighting strike but had burned more than 7,500 acres 16 miles south of the city limits as of Saturday night.

Facebook posts are full of people offering support to those in the trenches and encouragement and help for any families impacted by an evacuation notice for Pine Flat residents, which was lifted as of 6 p.m. Saturday.

Each day, firefighters seem to be making progress on suppressing the spread of the fire so it does not threaten private property and neighborhoods in and around Pine Flats, Potato Patch, Wolf Creek, Groom Creek, Indian Creek Walker and Crown King, the release stated.

Hot shot crews on Saturday finished construction of the direct hand line on the northwest side of the fire. Structure protection at Palace Station is near completion.

Firefighters and heavy equipment continued to clear brush along Senator Highway down to Hooper Saddle, according to the release.

The challenge on Saturday was the continuing hot and dry conditions without any cloud cover as occurred on Friday.

The Saturday night shift was expected to patrol the east side of the fire along Senator Highway, especially the Indian Creek area.

Hot and dry conditions are expected to remain until Sunday evening when moisture beings to increase, the release states. Winds will become lighter early next week as moisture increases across the region.

The key fuels cited for this fire are Ponderosa Pines, chaparral, and low brush and grass.

The potential for heavier smoke impacts exist into the weekend. Daily smoke outlooks are being posted to the Central Arizona Smoke Outlook at wildlandfiresmoke.net/outlooks/CentralArizona.

An interactive Cellar Fire Map is available at tinyurl.com/CellarFireMap.

For the latest information on Code Red, evacuations, and road closures, call the Yavapai County Emergency Operations Center at 928-771-3321 from 7 a.m. to 7 p.m.

The American Red Cross had arranged for shelter in the Prescott High School small gymnasium on Thursday, but as of Saturday afternoon Red Cross leaders said no one has needed those services. No one was at the shelter at 2 p.m. Saturday.

Staff and volunteers are prepared, though, if there becomes a need, officials said. A note on the gymnasium door lists several phone numbers for those who may find themselves in need of assistance.

Animal Disaster Services also had a trailer parked in the school parking lot.

“We’re just standing by on word from Yavapai County Emergency Management,” said Josh Ratcliff who answered the number posted on the door for anyone who might be in need. 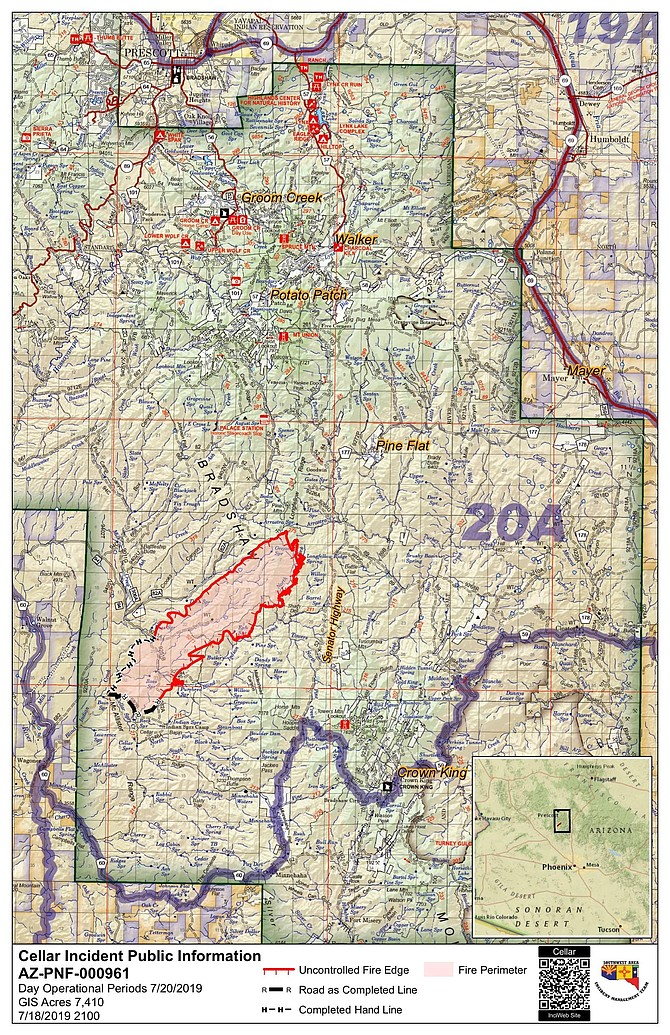