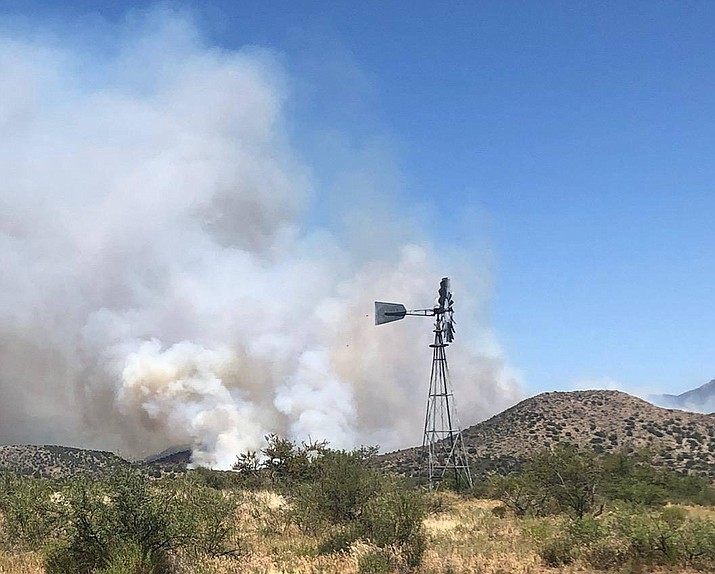 • FIRE – What a difference a week makes, huh?! The Cellar Fire, which was ignited by lightning south of Prescott on Sunday, July 14, has taken hold and torched more than 6,500 acres.

Still, it was chilling to report just after 4 p.m. Thursday that evacuation of Pine Flat had been ordered. About 24 hours earlier, I was speaking to the Dewey-Humboldt Firewise group about the 2013 Doce Fire, which caused my family and me to be evacuated from our home for four days.

I wish that on no one.

While we have other threats from Mother Nature to contend with locally, such as tornadoes and earthquakes, wildfires are always at the top of my list.

Yes, it is a dry heat. Yes, we have fires. Yes, they can be lethal and very destructive. Yes, the monsoons are on vacation (or are merely teasing us). Yet, this is still a great place to live.

• BURN? – About five fires existed July 14 and the Castle Creek Fire and the Cellar Fire were – early on – deemed good candidates for cleaning the forest floor; also known as, “let it burn.”

But, no, the fire officials have not lost their minds.

I am sure you have heard of prescribed burns. The fire officials, especially from the Forest Service, regularly conduct these to thin out undergrowth and make the forest healthier.

These were to be like that (they did not reignite any of them) – for which they don’t go home and let the blaze go. They monitor these wildfires. In the time I have lived in Prescott, forest officials have let fires burn near Camp Wood, northwest of Prescott, at least five times.

It seems crazy, but it works.

Simply put: the Cellar Fire became something else – it got into more fuel, winds picked up; it even started forming its own weather pattern (precipitation rising to freeze; a whole other phenomena).

You never fully know what wildfires will do; expect nothing.

• NOT PERSUADE – I read an interesting article by Editor & Publisher magazine, “A journalist’s job is to report, offer balance, not to persuade.”

Some people see a newspaper's news as either liberal or conservative. I always strive for right down the middle. That’s why, I believe, I get complaints regularly from both sides.

The Opinions Page, for instance, one day might lean left or right (they are opinions). But over a week, it is fairly balanced.

I think people get a preconceived notion in their minds, even leaning toward thoughts of conspiracy, and stick with it.

I heard from a man once who accused us of being far, far left. His evidence pointed to two editors who had not worked here in years. (The same goes for people thinking we’re opposed to XYZ or love ABC.) Last I checked, I can sleep at night and look myself in the eyes in the mirror each morning.

And, if you’d like to chat about that (or whatever) – I have an open door (actually, my office has no door). Call me, email me or come by.

• PICK OF THE WEEK – (Proving there’s always something good to do in the Prescott area that’s cheap or free): Prescott Summer Concert Series: Scandalous Hands, 6:30 to 8:30 p.m. Friday, July 19, at the courthouse plaza. prescottconcertseries.com.