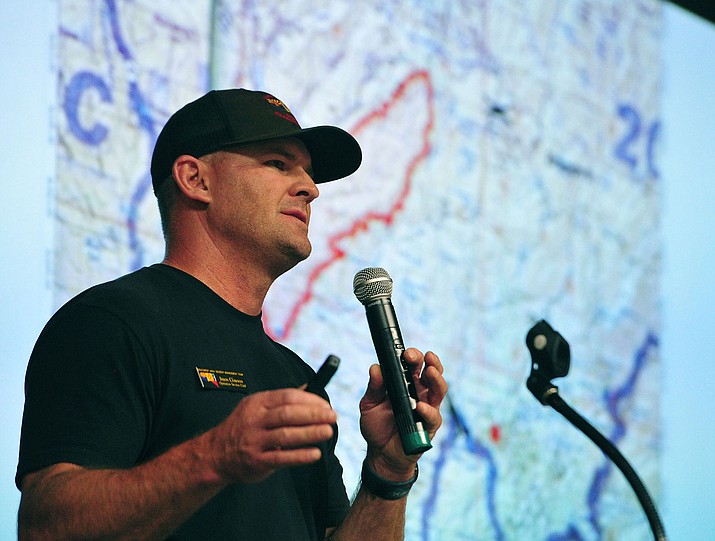 Despite deploying additional resources in the morning, fire officials were unable to prevent the Cellar Fire from threatening Pine Flat on Thursday afternoon, July 18.

Residents in the community were told by the Yavapai County Sheriff’s Office (YCSO) to immediately evacuate shortly after 4 p.m.

“There is a significant danger to you, gather necessary items and go,” the evacuation notice stated.

A shelter was set up at Prescott High School. Residents needing assistance were directed to call 928-771-3260 or 911.

The Southwest Area Type 1 Incident Management Team No. 1 assumed command of the fire at 6 a.m. Thursday, four days after the lighting-started blaze began near Wagoner.

Additional firefighters arrived as well to fight the blaze, which was at about 7,000 acres and 0% contained Thursday night, fire officials reported.

The fire was active in the afternoon on the north and east perimeter and moved in to North Fork drainage towards Yankee Mine, PNF spokesperson Debbie Maneely said in a release.

“Firefighters are actively engaged in fully suppressing the fire where they can do so safely and effectively,” Maneely said in the release. “This includes protecting values at risk including private property and infrastructure in and around Pine Flats, Potato Patch, Wolf Creek, Groom Creek, Indian Creek Walker and Crown King.”

A Very Large Air Tanker (VLAT) was effective in slowing the fire’s spread on the east side of the fire. Additional air tankers continued to support hotshot crews working on the northwest flank of the fire, Maneely said. 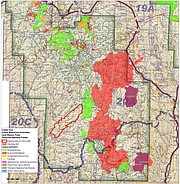 A Cellar Fire perimeter map showing where there have been historic fires. (PNF/Courtesy)

Forecasts call for a warmer and drier weather pattern to continue into the weekend. The conditions will bring the potential for more fire activity leading to the possibility of heavier smoke to the surrounding areas. Any smoke produced by the fire should move to the areas northeast and east of the fire, Maneely said. The highest concentrations are expected in the low-lying areas adjacent to the fire overnight and into the early morning hours.

Air quality monitoring is being conducted in the communities of Cordes Lakes, Dewey/Humbolt and Camp Verde.

A Prescott National Forest Cellar fire closure order went into effect Thursday morning, PNF officials said. It includes everything south of Wolf Creek including Potato Patch, south to the community of Crown King, which remains open for business. Detailed information and a map are available on Inciweb at https://inciweb.nwcg.gov/incident/6443.

As a reminder to the public, wildfires are a No Drone Zone.

“If you fly, we can’t,” Maneely said in the release. “Every time a drone is spotted near the fire all aircraft are grounded until we can be sure the drone is clear of this area.”

The meeting was livestreamed and can be seen on PNF’s Facebook page www.facebook.com/PrescottNF.

Several residents who evacuated from Pine Flat were there to hear fire officials speak.

One of those residents, Susan Coatney, said she was concerned for her property, but that her family has had to evacuate its home several times in the past few years due to fire danger.

“So we’re kind of experienced at doing this at this point,” Coatney said. “We can only be hopeful, but scared and traumatized again.”

Frank Freeman, who has a cabin in Pine Flat, feels a little more confident about the situation.

The Yavapai County Emergency Management office has activated the emergency phone bank to answer questions about the Cellar Fire.