Zoning map request in Prescott Valley would allow for 183-space manufactured home park
No zoning change yet on property at Highway 69, Fain Road 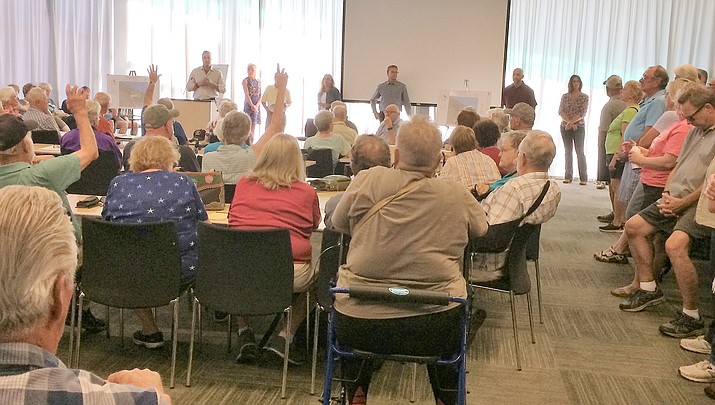 About 150 people showed up at a public meeting June 8 at the Prescott Valley Public Library to hear about a rezoning request for property located at the southeastern corner of Fain Road and Highway 69. (Sue Tone/Tribune)

Brad Fain faced a room of about 150 Villages at Lynx Creek residents who were there to ask questions about a project that may or may not come to fruition at the corner of Fain Road and Highway 69.

Fain, CEO of Fain Signature Group, a residential and commercial development and real estate company, described a potential plan for a manufactured home park comprised of 183 spaces on Fain property at the southeast corner of Highway 69 and Fain Road. The plan portrays the maximum units for the 27 acres, but that may not occur, Fain said. 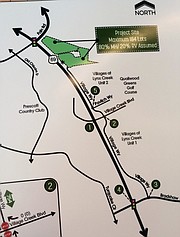 “We try to show you the maximum. Then, if another developer comes in to do 150, they may,” he said.

The company is requesting a zoning map change from R1-L (Residential; Single Family Limited) to C1-PAD (Commercial; Neighborhood Sales and Services – Planned Area Development) in order to allow development of the manufactured home park and/or recreational vehicle park, formerly called Evergreen Ranch, now known as Creekside Village. The Fains would not be the developer, he said. The first rezoning request was taken off the March 11 Planning and Zoning Commission meeting, and has not yet been rescheduled.

Asked what would happened if the Planning and Zoning Commission denied the request, Fain said, “You still have the same landowner, the same neighbor, and we’ll go back to the drawing board. That’s why we are working with you.”

Most of the people at the meeting live in the Villages of Lynx Creek, a development immediately south of the Fain property. The major concerns heard at the July 8 meeting had to do with roadways, access, traffic, and the fact the proposed development is not planned as a similar 55-and-older community like the Villages.

“There will be kids, teenagers, school buses, and more crime,” one attendee said.

“If we don’t put in an age restriction, yes, it could be family,” Fain responded. “What we heard was you didn’t want this as a part of your community.”

At a previous meeting with residents, Fain presented a plan that would add 57 spaces in the Villages, along with development of the remaining property. Residents opposed that idea, Fain said, so the current plan is to make the development separate from the Villages and offer lot spaces for lease only.

Another concern expressed by residents was the sole access to the property by way of Village Way off Highway 69. Arizona Department of Transportation (ADOT) will not allow a traffic light along this stretch of highway, nor on the Fain Road side of the property. There are plans for an emergency access lane that would empty onto Highway 69 north of Village Way.

Residents also brought up their thoughts on renters who may not take as good care of the property as owners do. Fain said a market exists for people who want to rent space for their manufactured homes or RVs.

Joe Slinger, a seven-year resident of the Villages, said the Fains had looked at previous comments and “satisfied every one of them.” It is buildable property, the emergency road will provide enough access, and it doesn’t look like there is a problem with water, he added.

Any developer that purchases the property will need to obtain approval for adequate water supply from the Arizona Department of Water Resources.

Anessa Andrews, director of New Development and Construction for Fain Signature Group, also explained that every new development is required to have some type of open space. “This is a conceptual plan; those areas are not determined yet,” Andrews said.

Fain said once the change is zoning is achieved, the best-case scenario for start of construction would be the fourth quarter of 2020. Or it might be two or three years, he said.