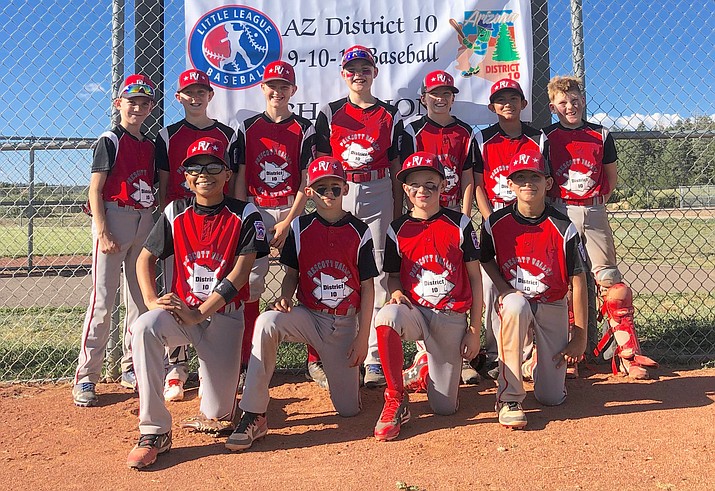 The Prescott Valley Little League 11U All-Stars pose for a team photo following an 8-7 win over Mohave Valley in a loser’s brakcet game of the state tournament on Wednesday, July 17, in Flagsatff. (Barry Wallace/Courtesy)

FLAGSTAFF — “Adversity” might as well just be the Prescott Valley 11U All-Stars’ middle name.

In the District 10 tournament, Prescott Valley did not have the best start but came out of the loser’s bracket anyway to topple Prescott in the championship. Now that the team has qualified for the state tournament in Flagstaff, they were ousted by Chandler-National North 7-4 on Monday but recovered to derail Mohave Valley 8-7 in a comeback victory on Wednesday.

Despite trailing 4-0 early on in this loser’s bracket showdown, it was a six-run rally in the third inning and a late lockdown defensive effort that helped PV eliminate Mohave Valley from the tournament. Prescott Valley sported a relatively comfortable 8-5 lead by the end of the fourth but had a shaky sixth inning, allowing two runs to make it an 8-7 game.

However, closer Antonio Valenzuela proved he had ice in his veins, limiting Mohave Valley to just those two runs while tossing five strikeouts en route to the win. On offense, Nick Martin had himself a game, going 2 for 3 at the plate with four RBIs while Donovan Bayard also went 2 for 3 with one RBI.

Prescott Valley hits the field again for the third round of the loser’s bracket on Thursday at 5:45 p.m. They will play the winner between Goodyear and Arcadia.

All tournament games will be held at Continental Park in Flagstaff.