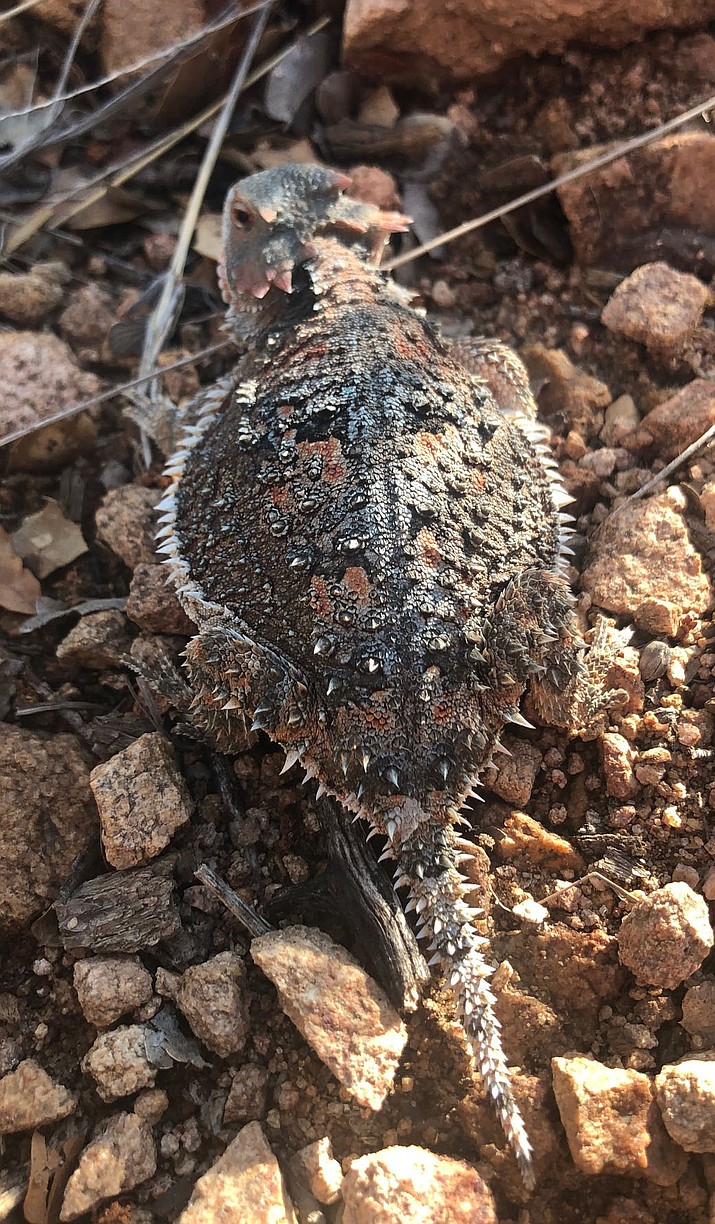 A horned lizard observed recently on a segment of the Prescott Circle Trail. (Eric Moore/Courtesy)

This past Saturday, Gayla and I hiked segment four of the Prescott Circle Trail, from White Spar Road to Copper Basin Road. The trail skirts both Quartz and Wolverton Mountains south of Prescott and climbs almost 1,000 feet in elevation.

Our timing was really good, as it had just finished raining. An added benefit of the light rain that fell was the impact it had on nature — namely the emergence of flying ants. I readily admit I don’t know a lot about insects, but I have experienced the phenomenon on previous occasions where summer rains trigger a response from dormant flying ants. There is obviously something about the rains that causes them to come out of their tunnels and take flight.

The late afternoon sky was filled with flying ants — there were probably hundreds of thousands, maybe millions — that took to the sky. Looking west, with the afternoon sunlight backlighting the ants, it reminded me of “cotton” from cottonwood trees drifting through the air.

Two days earlier, as I was leading a Jay’s Bird Barn-sponsored bird walk, I asked the group if anyone had seen any horned lizards this year. I guess the habitat we were in seemed appropriate for horned lizards, and it made me think of them.  I remarked that I hadn’t seen any this year.

Well on Saturday that all changed. We didn’t see one, or two, or three, or even four. No, we saw five horned lizards on our hike! I can’t recall a time when I’ve seen five horned lizards in such a short span of time. I have to think that between the rain fall and the emergence of flying ants, the lizards were out to gorge themselves on the bounties of nature.

Speaking of gorging: A large, regal looking female Cooper’s hawk caused a disturbance in our cul-de-sac this past Sunday. I happened to be out in the yard when all of a sudden the scrub-jays began to make a racket! They were really worked up. I have learned to key in on this alarm behavior, as it is usually an indication of a predator in the area.

I focused on the jays, and in a few moments I saw the hawk — down on the ground, holding prey in its talons. I didn’t have my binoculars on me, and I was hesitant to run inside to grab them, as I thought I might frighten the hawk and therefore wouldn’t be able to see what was going on.

The jays continued to mob and harass the hawk. I had the feeling that perhaps the hawk had caught a jay — perhaps a juvenile — and that was why they were so worked up. Eventually I felt the hawk was so focused on its meal that I could move without flushing it, so I hustled inside and grabbed my binoculars.

With the aid of binoculars, I could see the hawk’s plucking motion — where the hawk plucks the feathers off of the birds she catches before consuming her prey. Again, based on behavior, I assumed she had captured a bird.  However, as I continued to watch, I noticed a set of long ears. It wasn’t a bird at all, it was a baby cottontail rabbit and the hawk was plucking fur, not feathers!

The hawk efficiently dismembered the rabbit and ate large chunks of meat. This was a beautiful adult female, obviously an experienced, capable hunter. After a period of time I left the hawk alone to consume her meal. When I went outside later, I was shocked to see how little was left—only a little fur and some bowels.

Eric Moore is the owner of Jay’s Bird Barn, with two locations in northern Arizona – Prescott and Flagstaff.  Eric has been an avid birder for over 50 years. If you have questions about wild birds that you would like discussed in future articles, email him at eric@jaysbirdbarn.com.

Birds - and snakes - are out in force
Birding: Birding on a bike
Moore: Fireworks in the forest on the Fourth of July
Birding challenging without binoculars
Peregrine falcon appears in Prescott