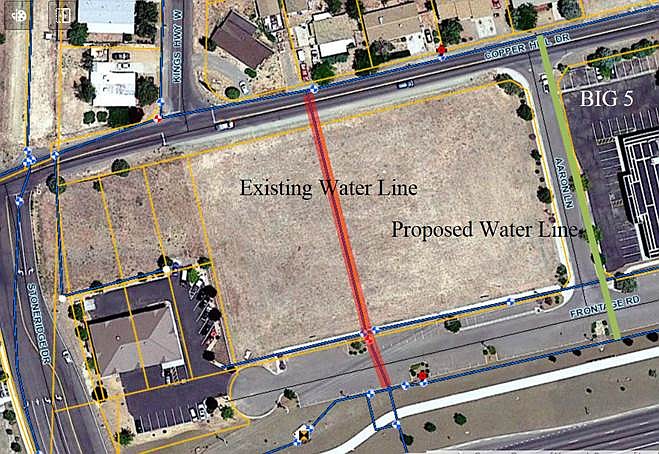 The old water main under property owned by Franklin Phonetic School hasn’t been used in years and it’s time to remove it.

The Prescott Valley Town Council approved a construction contract at its July 11 meeting to award a contract to Earth Resources Corporation, the sole bidder, for $174,257 to remove the old water line and install a new line in the public right-of-way along Aaron Lane.

The contract calls for about 290 feet of a new 12-inch water main on Aaron Lane between Frontage Road and Copper Hill Drive near Big 5 Sporting Goods store.

The project is part of the recent settlement of litigation with Franklin Phonetic School, said Neil Wadsworth, director of utilities for the town.

“It fulfills the town’s commitment to move a water line from the property owned by Franklin into the public right-of-way to the east,” Wadsworth said in the information packet to council.

He noted that the project is over budget in part due to the robust economy that has reduced the number of bidders and increased bid prices.

“Because this project is part of litigation settlement and is time and scope sensitive, staff is recommending that the bid be accepted and that the project go forward as scoped,” he stated.

In a related matter, council also voted unanimously to amend the town engineer agreement with Dava & Associates to add $29,910 for the Aaron Lane Water Main Project for professional design and construction administration services.