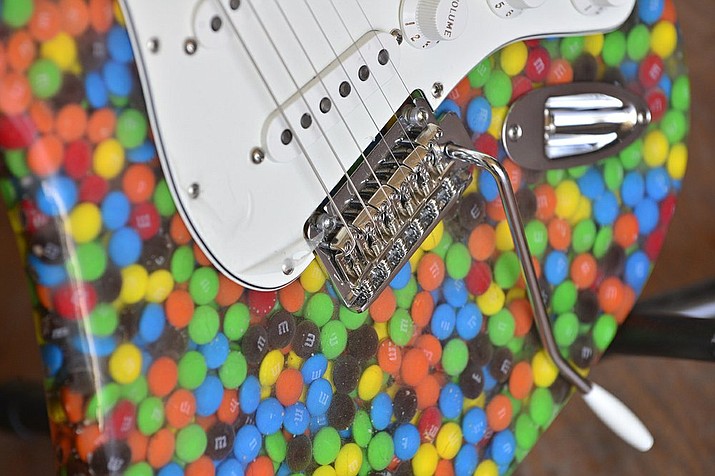 This photo shows a detail of the M&M's guitar that Brian King of Norfolk built. The guitar took about 80 hours in total, he said. (Darin Epperly/The Norfolk Daily News via AP)

NORFOLK, Neb. — What does it take to make a mind-meltingly cool guitar?

Brian King knows a little bit about it after making his own colorful custom guitar build a few months ago. The Norfolkan calls it one of his “mad scientist projects.”

The guitar took about 80 hours in total, he said, especially taking curing time into consideration. He completed it over the course of about three weeks, the Norfolk Daily News reported. 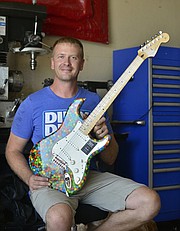 Brian King with the M&M guitar he built. The guitar took about 80 hours in total, he said. (Darin Epperly/The Norfolk Daily News via AP)

The process involved taking apart a new Fender guitar, creating a mold from it, then adding three bags of plain M&M’s and epoxy to the mold. After the epoxy mix hardened, he cut out holes and added an epoxy topcoat for extra shine and protection. Finally, he drilled holes for the guitar neck and reassembled the guitar.

Assembly took place in his garage workshop, which includes all the equipment he needs, as well as some car projects he’s done. But it came with its fair share of difficulties.

“That was one thing about this garage,” he said. “You could just smell the M&M’s, it was so hot and they were melting, and of course ants are running around grabbing pieces so I was cleaning up as I go.”

Also helping with the effort? His three children, who assisted by counting M&M’s and mixing epoxy.

The sweet creation is fully functional, but you might not want to play it standing up — the guitar is at least eight times heavier than the original, King said. It was inspired by a similar build with Jawbreakers candies that he saw on the internet.

It’s not the first guitar he’s built. Among his other builds are a clear-bodied Flying V and a violet B.C. Rich guitar. In his projects, he goes off his own instructions and instincts.

“Those are just stuff I randomly bought parts for off the internet and put together, kind of a Frankenstein thing,” he said.

He found working with a Fender to be slightly easier than other guitars because the body’s components provide more wiggle room. Even so, you still have to be exact in the measurements.

“These guitars, you have to make sure you come pretty darn close with all the measurements that it lines up right,” he said. “The bridge and the back; the strings have to be in line with everything, too.”

He likes to keep the guitars for his collection after building them, although he put up the M&M’s guitar on Facebook to see if anyone was interested in it.

King first got interested in guitars about 15 years ago. He learned how to play after getting into Metallica, but soon realized he was more into building than playing them.

“I couldn’t play it to save my life, but I wanted to build them. I branched off from there,” he said. “I’m just kind of a scatterbrain that way.”

The next idea he’s cooking up is a guitar covered in coffee beans, even on the neck. He’d also like to do a guitar with Lego pieces, but the materials would be much more pricey.

“I was looking at doing a Lego (build). I think it’d look pretty neat,” he said. “There’s all kinds of things a guy can pack into these.”