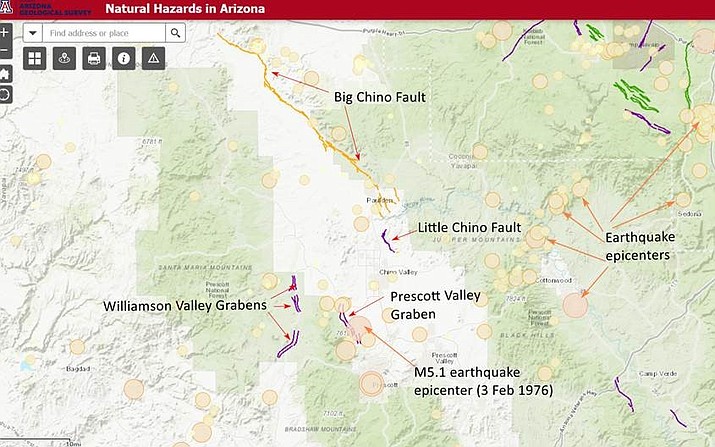 A mapping system that shows known earth fissures and documented earthquakes in Arizona. In the quad-city area, the known faults are the Big Chino and Little Chino. There also are a number of grabens in and around Prescott. (Arizona Geological Survey/Courtesy)

Californians were recently reminded of what the ground we stand on is capable of, with two large earthquakes that centered near the small town of Ridgecrest on July 4 and 5.

Those quakes, which reportedly were felt by some Arizona residents hundreds of miles away, may have left some Quad Cities residents wondering what the earthquake risks are in our area.

Well, according to experts, Prescott and its neighboring towns could experience quakes just as large as those that erupted near Ridgecrest due to some significant local fissures.

The largest of the bunch is known as the Big Chino fault, which runs about 30 miles from Paulden up toward Seligman.

“If it were to rupture along the entire length, it would probably be a magnitude 7 or larger event, which would certainly have some deleterious impact on Paulden, Chino Valley and the City of Prescott,” said Mike Conway, senior research scientist with the Arizona Geological Survey at the University of Arizona.

A smaller fault closer to Chino Valley known as the Little Chino is believed to have caused a 6 or 6.5 magnitude quake about 10,000 to 15,000 years ago, but little else is known about when another significant event might occur.

“Faults like the Big Chino and Little Chino have not been terribly studied, so we don’t know the repose period — the time between ruptures,” Conway said. “We suspect it’s on the order of 15,000 or 20,000 years for a big event.”

Some small fissures known as grabens in northern Prescott and along Williamson Valley Road were responsible for one of the more significant earthquakes the Quad Cities have experienced in recent history. The quake, which was measured as a magnitude 5.1, centered between Prescott and Chino Valley on Feb. 3, 1976.

“Prescott got rocked pretty good,” Conway said in regard to that event. “It did some damage, but nobody got hurt as far I know.”

While stronger earthquakes are unusual in Arizona, the potential exists for them to cause damage to property and/or result in people being injured or killed.

To safeguard from these risks, there are a few simple measures residents can take, according to the Arizona Geological Survey.

The first step is to identify potential hazards in the home or workplace and fix them. These include anything that may fall from walls or shelves. It is better not to have such items directly over areas where people spend much of their time, such as beds or sofas. It is also a good idea to ensure those items are secured in place, whether that be with removable putty or other adhesives. Securing larger items, such as water heaters and top-heavy furniture, also can prevent potential problems. 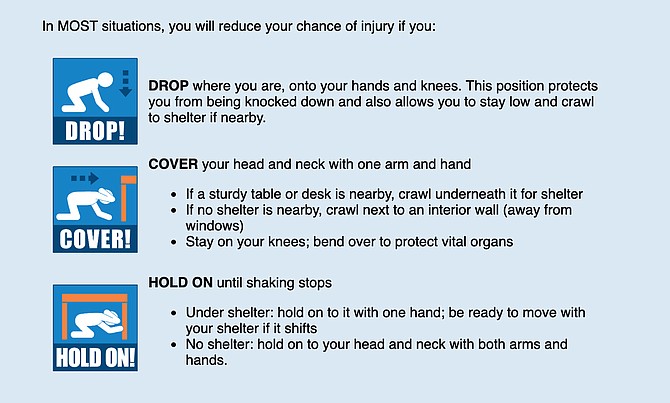 You should immediately protect yourself after the first jolt on an earthquake. Don’t wait to see if the earthquake shaking will be strong. (earthquakecountry.org)

In the event of an earthquake, the best thing to do is simply “drop, cover and hold on,” Conway said.

“So the idea is to drop to the ground, get underneath something like a table and hold on to the table so that it doesn’t shake away from you,” he said.

The Arizona Geological Survey actually tries to get as many people in the state to practice dropping, covering and holding on during an annual event called the Great Arizona ShakeOut. The event is scheduled for Oct. 17 this year; residents can be register by going to www.shakeout.org/arizona/.

After riding out an earthquake, it is important to look for injuries or damage, and then check for directives from local authorities, such as evacuation notices, Yavapai County Emergency Manager Ron Sauntman said. If residents aren’t told to evacuate, it is best to stay off major roadways until the dust settles.

“Unless you’ve been instructed to evacuate, you want to allow the opportunity for response resources to get in and out of an area, so clogging up transportation is a big deal,” Sauntman said.