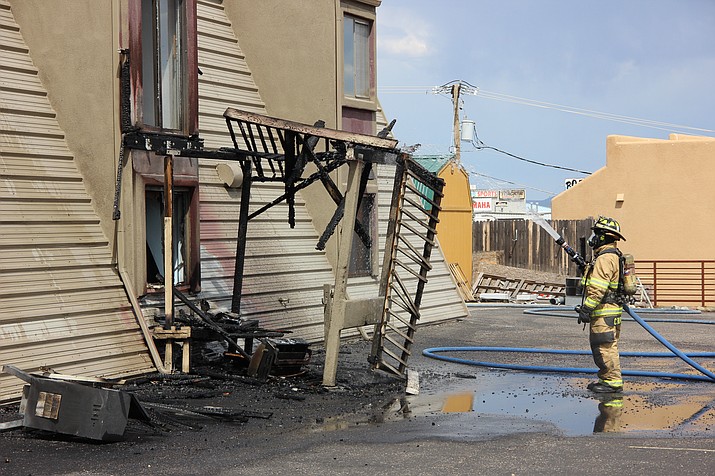 A firefighter with the Central Arizona Fire and Medical Authority extinguishes hotspots on the remains of a balcony that lit on fire Thursday, July 11. (Max Efrein/Courier)

Crews with the Central Arizona Fire and Medical Authority (CAFMA) were able to save a building in Prescott Valley from extensive damage by quickly extinguishing a balcony fire Thursday afternoon, July 11.

At about 3 p.m., a local resident driving along Highway 69 noticed that a back deck was on fire at a property along Valley Road and notified an officer with the Prescott Valley Police Department (PVPD), according to PVPD officials.

The officer drove over to the property, located at the intersection of Valley Road and Grizzly Bear Drive, confirmed that a balcony was on fire and called CAFMA.

By the time firefighters got on scene, the flames had started to creep into the building, CAFMA Battalion Chief Brad Davis said. But firefighters were able to get a quick knockdown on the blaze before it could get much further.

“The interior of the building suffered some heat and smoke damage,” Davis said.

When the smoke cleared, there appeared to be the remains of a barbecue grill among the balcony's ashes.

No one was in the building at the time of the fire and the cause remains under investigation.