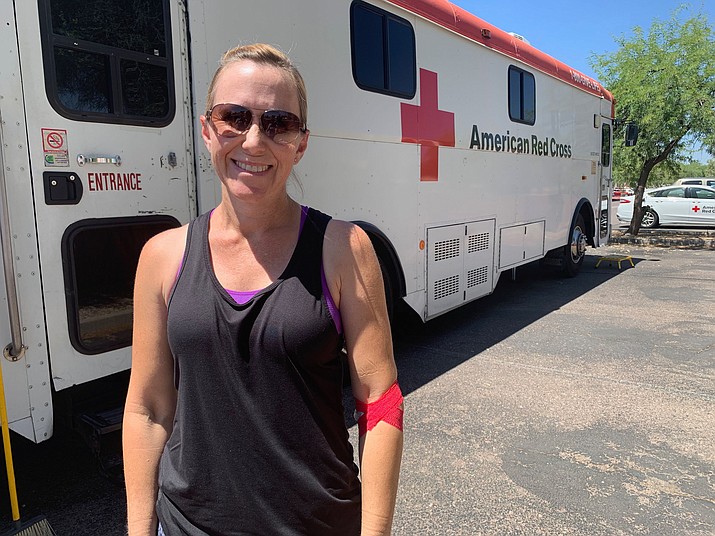 Karen Robinson volunteered for the American Red Cross in high school because she was ineligible to donate blood, but this week the Chandler mom was proud to give blood to support her daughter’s friend, who has been affected by the summer shortage. (Amanda Slee/Cronkite News)

There were about 450 fewer blood drives last week because of the Fourth of July holiday, which resulted in 17,000 fewer donations than what’s needed for patients in a week, the Red Cross said.

The emergency call is for all blood types.

“In the summertime, that is where we see the supply is low and the demand of course always remains high, if not higher in the summer time because of accidents,” said Colin Williams, who handles regional communications for the Red Cross in Arizona, New Mexico and the El Paso region.

The shortage has a number of causes. Blood drives get canceled due to bad weather, and schools, which host blood drives during the academic year, are out for the summer.

“What happens is all these banks are being affected by the same weather conditions … the earthquakes out in California affect how much blood can be collected out there,” Williams said.

The Red Cross, which collects about 40% of the nation’s blood, depends on businesses and schools to set up blood drives.

Karen Robinson, Chandler resident, volunteered for the American Red Cross in high school because she was ineligible to donate blood, but this week she was proud to be able to give blood and support her daughter’s friend who’s been affected by the blood shortage. (Photo by Amanda Slee/Cronkite News)

Karen Robinson of Chandler donated earlier this week, and she understands the importance of giving blood.

“My daughter has a friend who has an autoimmune issue,” Robinson said. “She has to have IV therapy every three weeks … and they recently encountered a shortage of the plasma that she needed.”

Now through July 31, the American Red Cross has scheduled blood donation opportunities across metro Phoenix. Williams said all blood types are needed, including O, which is the most versatile of all types.

“Absent of knowing a person’s blood type during an accident, let’s say they’re unconscious or incapacitated, the ability to use that type O blood … is vitally important,” Williams said.

The American Red Cross last month launched the Missing Types campaign to encourage people to donate whole blood and platelets during the summer, when shortages typically occur. The letters A, B, and O, which designate the main blood groups, disappeared from various name brands. The goal was to show what happens when blood is missing during shortages.

Blood donations, despite the campaign, fell short, according to the Red Cross, with about 24,000 fewer donations across the U.S. than needed.

For more information about giving blood and the Red Cross, visit redcross.org, or call the regional office in Phoenix at 602-336-6660.