Preview: Who's on second? All-Star Game set to trot out free runners
MLB 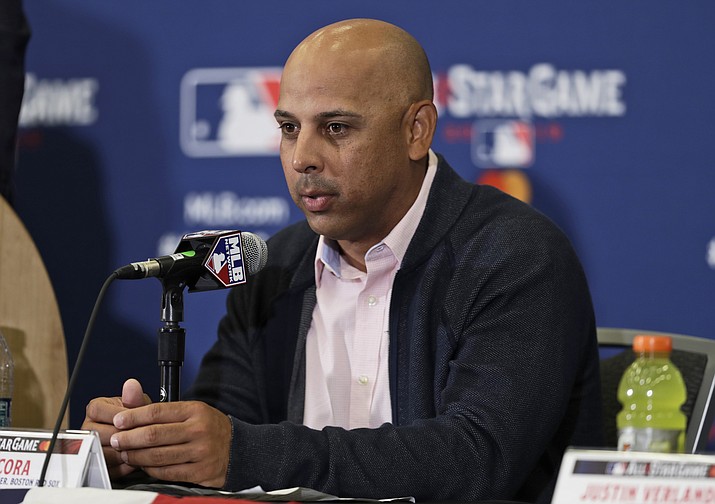 CLEVELAND — We've seen Reggie hit the light tower, Pete Rose crush a catcher to score the winning run and a tribute to Ted Williams that sent shivers through Fenway Park.

But come the All-Star Game on Tuesday night, baseball fans might witness something they've never seen before.

Already employed in the minors, the World Baseball Classic and Olympic softball, a new rule will take effect in front of a major league audience: Every extra inning in All-Star play — top half and bottom — begins with a free runner at second base.

"They're doing that? Really?" Houston reliever Ryan Pressly asked Monday. "I did not know that."

The crowd at Progressive Field got a glimpse of the future, maybe, on Sunday night when the Futures Game tried the rule for an inning. No one scored, and the showcase for young talent wound up in a tie.

Jeff McNeil, the top hitter in the majors this year, saw the scenario a lot last season in Triple-A. There, the goal is to shorten games and save wear and tear on pitching staffs.

Still, it could be real timely. The last two All-Star Games both went extras — Robinson Cano hit a leadoff homer in the 10th at Miami in 2017, Alex Bregman did the same last year in Washington.

Plus, there was the 15-inning affair at Yankee Stadium in 2008 and the dreaded 2002 game in Milwaukee that was declared a very unpopular tie after the 11th.

Naturally, in a sport where change comes slowly, not everyone is thrilled with this experiment. To many, instant intentional walks, constant shifts and talk about robot umpires has skewed the game enough.

If it's any consolation, commissioner Rob Manfred says there are no foreseeable plans to put free runners on base in the regular season.

"I know how people are against it, especially players in the game. Yeah, the tradition is big in this sport, just like a lot of top-tier sports," Baltimore pitcher John Means said.

AL manager Alex Cora of the Red Sox had a mixed view.

"I've seen the rule play before internationally. And it's kind of like the coolest, more tougher thing ever in baseball, to be honest with you," he said Monday.

NL manager Dave Roberts of the Dodgers was firm.

"I'd rather not see it in play tomorrow. I'd rather see nine innings of baseball. And going forward ... I don't know, probably the wrong thing to say, but I kind of like it the way it is right now," he said.

Some teams actually tried this out during spring training, starting with ties in the ninth. San Francisco manager Bruce Bochy was the first to give it a go — mass confusion ensued, mostly because he forgot to tell his players what was happening.

Oakland right-hander Liam Hendriks realizes he could be on the spot Tuesday night.

"It's not an ideal scenario for a reliever because we're the ones that get stuck with it," he said. "You're coming into a situation already with the guy on base in a tie game, there's so many possibilities that can happen."

"For the All-Star Game, I understand it. And now with home-field advantage not being decided by it, I don't think it's the worst thing in the world," he said.

"It changes everything," she said during the All-Star festivities. "Normally, in softball, there's a bunt to get the runner over in that situation. It will be interesting to see in baseball if the same strategy is used."

The automatic runner will be the player who made the last out of the previous inning. But in a caveat, players who have left the All-Star Game can re-enter to run.

For official scoring purposes, if a freebie scores, it will count as an unearned run. As for strategy, what to do with that runner?

"There's a lot of different ways you can play it, too. I mean, you can either bunt him over or swing to get him over, or you can try to hit. You've got to play for more than one run there," McNeil said.

That's fine with New York Mets teammate Pete Alonso. The rookie slugger has hit 30 home runs this season — he's never put down a sacrifice in college, the minors or the majors, and isn't about to start now, even if he leads off the 10th with a runner on second.

And, he doesn't think Major League Baseball should change its approach.

"For me, I'm kind of an old-school guy. I like just playing it like a regular game. I think that's kind of the most natural way to go about it," Alonso said.

"Since the Civil War, the bags haven't moved, the mound hasn't moved and the rules haven't changed until recently. So I think in the big leagues it should stay the way it is," he said.