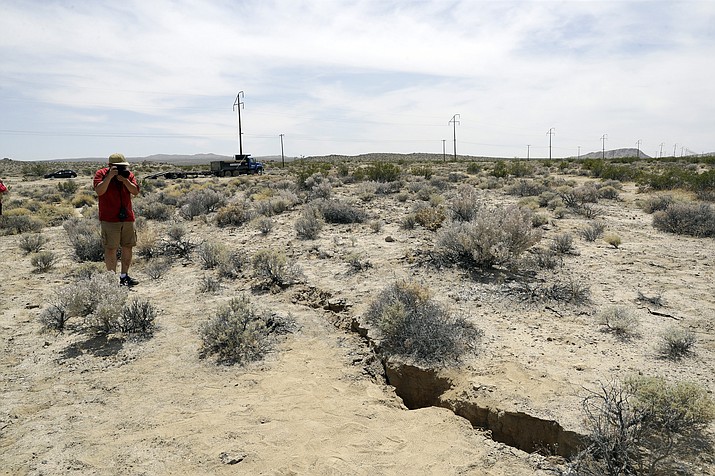 A visitor takes a photo of a crack on the ground following recent earthquakes Sunday, July 7, 2019, outside of Ridgecrest, Calif. (AP Photo/Marcio Jose Sanchez)

LOS ANGELES — The powerful Mojave Desert earthquakes that rocked California ended a years-long lull in major seismic activity and raised new interest in an early warning system being developed for the West Coast.

The ShakeAlert system is substantially built in California and overall is about 55% complete, with much of the remaining installation of seismic sensor stations to be done in the Pacific Northwest, said Robert de Groot of the U.S. Geological Survey.

Areas that have the appropriate number of sensors include Southern California, San Francisco Bay Area and the Seattle-Tacoma region, de Groot said.

The system does not predict earthquakes. Rather, it detects that an earthquake is occurring, rapidly calculates expected intensity levels and sends out alerts that may give warnings ranging from several seconds to perhaps a minute before potentially damaging shaking hits locations away from the epicenter.

Depending on the distance, that could be enough time to automatically slow trains, stop industrial machines, start generators, pull a surgical knife away from a patient or tell students to put the "drop, cover and hold" drill into action.

For alerts to be useful, delivery has to be timely, and that's a problem with current cellphone technology. For cellphone delivery, the USGS ultimately intends to use the same system that delivers Amber Alerts, sending signals to everyone in reach of cellphone towers in defined areas where damaging shaking is expected.

Pilot programs involving select users have been underway for several years. In October, the USGS announced the system was ready to be used broadly by businesses, utilities, schools and other entities following a software update that reduced problems such as false alerts typically caused by a big quake somewhere in the world being misidentified as a local quake.

Currently, the only mass public notification is possible through a mobile app developed for the city of Los Angeles and functional only within Los Angeles County.

The ShakeAlertLA app did not send alerts for last week's two big quakes, but officials said it functioned as designed because the expected level of shaking in the LA area — more than 100 miles from the epicenters— was below a trigger threshold.

Thresholds for alerting are important because California has daily earthquakes.

"Imagine getting 10 ShakeAlerts on your phone for really small earthquakes that may not affect you," de Groot said. "If people get saturated with these messages it's going to make people not care as much."

In the Mojave Desert on Monday, rattled residents cleaned up and officials assessed damage in the aftermath of Thursday's magnitude 6.4 earthquake and Friday's magnitude 7.1 quake centered near Ridgecrest.

It could be several more days before water service is restored to the small town of Trona, where officials trucked in portable toilets and showers, said San Bernardino County spokesman David Wert.

Ten residences in Trona were red-tagged as uninhabitable and officials expect that number to increase as inspectors complete surveys. Wert said he's seen homes that shifted 6 feet (nearly 2 meters) off their foundations.

Electricity was restored to Trona over the weekend, allowing people to use much-needed air conditioners as daytime temperatures approached 100 degrees (38 Celsius).

Teams will need several more days to finish assessments in nearby Ridgecrest, where the number of damaged buildings will likely be in the dozens, Kern County spokeswoman Megan Person said.

Person says officials are bringing in counselors to help residents still on edge as aftershocks rattle the area.

"You can't feel every single one, but you can feel a lot of them," she said. "Those poor people have been dealing with shaking ground nonstop since Thursday."