A coyote killed my pet ... Can I shoot it?
No — but town, city, county codes have specifics 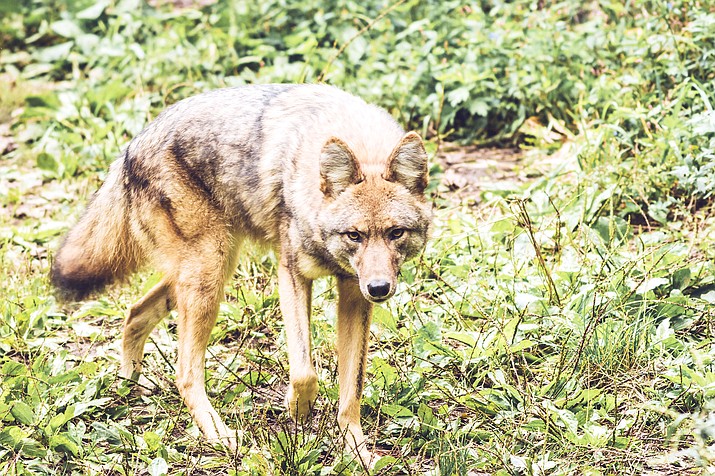 RELATED STORY: You can't just shoot coyotes, can you?

The short answer to whether or not you can shoot a coyote running through your backyard with a cat or dog in its mouth is no, you cannot shoot the coyote.

It is a different matter if the coyote is attacking you or another human being.

While state statutes prohibit discharging a firearm within town or city limits, it does make provisions for self-defense. The Arizona Revised Statues (ARS 13-3107 -- Unlawful discharge of firearms; exceptions; classification; definitions) states, “A person who with criminal negligence discharges a firearm within or into the limits of any municipality is guilty of a Class 6 felony.”

Exception C.9, however, covers protecting oneself with a firearm: “In self-defense or defense of another person against an animal attack if a reasonable person would believe that deadly physical force against the animal is immediately necessary and reasonable under the circumstances to protect oneself or the other person.”

Conflicts between coyotes and humans are common in the Greater Prescott area, and pretty much everywhere else coyotes reside, said Darren Tucker, Wildlife Manager supervisor, Prescott, said in an email.

“They are smart animals that quickly learn locations where they can obtain an easy meal,” Tucker said.

He encourages people to exercise reasonable measures other than killing coyotes, such as making pets unavailable to coyotes. “Cats that are allowed to range freely are easy targets for coyotes. Also, appropriate fencing – even electric fencing – can prevent coyotes from entering residential yards where pets are located. Pet owners should be extremely vigilant when letting small pets out at night in areas where coyotes are known to frequent.”

The Arizona Game and Fish Department website, www.azgfd.com, has information on how to let coyotes know they are not welcome in yards: yell, bang on pots, throw sticks or rocks, or spray them with a hose.

“You must aggressively discourage coyotes from feeling comfortable around you and your family by never intentionally feeding coyotes, eliminating attractants (food sources, including pet food) from your yard, using aggressive gestures toward coyotes when you see them, and encouraging your neighbors to do the same.”

While state statutes provide a standard code, counties and municipalities may have their own stricter regulations on discharging weapons. Yavapai County residents fall under state statute regarding use of firearms. (See related list of local governments’ ordinances and use of guns, including BB-guns.)

ARS Title 17-239 addresses wildlife, Tucker said. It states, in part, “Any person suffering property damage from wildlife may exercise all reasonable measures to alleviate the damage, except that reasonable measures shall not include injuring or killing game mammals, game birds or wildlife protected by federal law or regulation …”

This allows people to set mouse or gopher traps without a hunting license. Coyotes are not considered game mammals, nor are they federally protected, and therefore a person may legally kill a coyote that is causing property damage, which includes pets, he said.

“It is important that folks remember the provisions within ARS 17-239 do not supersede other laws such as the prohibition of shooting within one-fourth mile of an occupied residence when taking wildlife, disorderly conduct, endangerment etc.,” Tucker said. “In many situations where citizens experience a coyote problem, lethal removal by shooting them is, quite simply, not a reasonable option.”

He suggests contacting Game and Fish or private companies licensed through the Arizona Game and Fish Department who can capture and remove offending animals.

Jerry Ferguson, Community Services officer with Prescott Valley Police Department, said if someone is personally being attacked by a coyote and they have a weapon on them, “just make sure they hit the coyote so there’s evidence that’s what happened. Or at least have the wounds to show.”

Shooters will be cited for discharging a weapon within town limits. The person would then have to explain to the court what happened and the court would decide the penalty.

“You don’t know where the bullet is going to land, even if you shoot it into the air,” he said.

“There’s no law against shooting a bow and arrow in the backyard, but you better be aware of where it’s going to land. It could be considered assault with deadly weapon if the arrow lands in a person. Same as with slingshots, all of that,” Ferguson added.

He said the town has coyotes, but it is the town and its residents who have encroached on the coyotes’ territory with the building of houses.