Road work to add additional lanes, ease I-17 gridlock expected to be underway by 2021 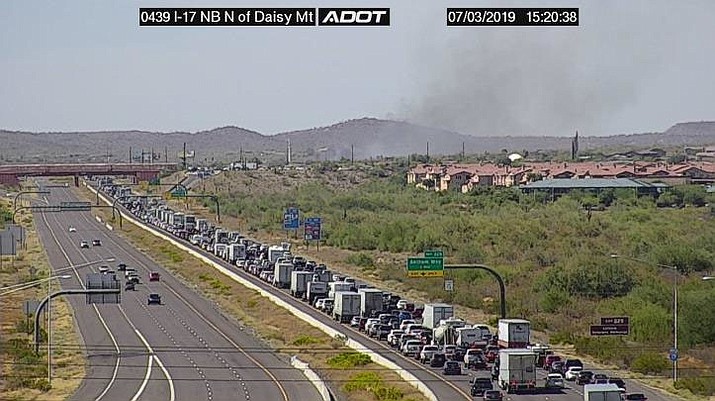 An Arizona Department of Transportation (ADOT) camera along Interstate 17 at Daisy Mountain Drive in the Anthem area shows the backup of traffic Wednesday afternoon, July 3, due to a brush fire north of Phoenix. Construction of new lanes — expected to start in 2021 — is intended to help alleviate clogged traffic on the interstate. (ADOT/Courtesy)

As the main transportation route between northern Arizona and Phoenix, Interstate 17 affects countless aspects of life for Prescott residents.

Medical procedures, airline flights, commuting for work, even the groceries on the shelves – they all are impacted directly by I-17.

“It is a very important corridor,” Chris Bridges, administrator of the Central Yavapai Metropolitan Planning Organization (CYMPO), said this week. He noted that the interstate provides “access to just about everything — goods, services.”

And when that artery becomes clogged with gridlock traffic, as it did again this past week, many of those activities come to a standstill.

For hours on July 3, the already heavy northbound Fourth of July traffic came to a halt because of a brush fire north of Phoenix.

That was just one example of the many highway closures that happen throughout the year, most of which are a result of vehicle collisions.

In 2014, the Arizona Department of Transportation (ADOT) estimated that similar closures happen on an average of once a week.

And in 2018, ADOT officials reported that I-17’s traffic counts had increased dramatically in recent years — from highs in the 40,000-vehicle range just a few years before, to daily counts of upwards of 60,000 vehicles during the weekends.

All of those factors have contributed to the years-long push to improve the interstate.

In 2015, the CYMPO Board sent a resolution to the Arizona State Transportation Board, urging the state to come up with the money for an I-17 fix. The resolution maintained that the current situation affects “the economic vitality, mobility, safety, and general welfare of the CYMPO region, as well as all of Arizona.”

Then, during a heavily attended public meeting in Black Canyon City in 2018, ADOT announced plans that included construction of two “flex lanes” in the interstate’s median from Black Canyon City to Sunset Point.

The flexible lanes are planned to be reversible and would essentially double the interstate’s capacity during peak traffic times.

For example, when weekend visitors are flooding back to Phoenix on Sunday afternoons, the flex lanes could be opened to provide a total of four lanes going south. The same could happen northbound on Friday afternoons and Saturday mornings, as the traffic heads north.

This year, the ongoing push for a fix resulted in the final needed funding.

In May, an ADOT news release noted that the 2019-20 state budget included funding for the full I-17 widening project north of the Valley of the Sun, along with the flex lanes.

“With planned Interstate 17 flex lanes between Black Canyon City and Sunset Point set for construction starting by 2021, the state budget approved by state lawmakers and signed by Gov. Doug Ducey provides the additional funding needed to also complete widening I-17 south of where the flex system will be built,” the news release states.

It explains that the state’s $130 million investment would help to complete the new third lanes in both directions between Anthem and Black Canyon City.

As a part of the total, the Maricopa Association of Governments (MAG) is also contributing $50 million, said ADOT spokesman Doug Nintzel.

With the funding now in place, ADOT is gearing up for a mammoth project that will encompass about 23 miles of interstate.

“We’re going to do this as one project,” Nintzel said this week.

Work is underway on the contract procurement details, Nintzel said, and construction is expected to begin in calendar year 2021.

“We plan to complete the environmental studies this year and move into the process of advertising for a contractor team,” he said.

The flex lanes will run parallel to, but separate from, the southbound lanes of I-17.

During the construction, “Communication will be a big part of this project,” Nintzel said. ADOT intends to use social media channels as well as highway message boards and media outlets to keep drivers informed.

Major road restrictions are expected to be scheduled during the overnight hours, Nintzel added.

Improvements are coming to I-17, says ADOT
Arizona awarded $90M federal grant to expand I-17
I-17 widening, reversible lanes, climbing lanes could help ease traffic problems
Solutions sought to I-17 issues
What’s in the works for our highways in Prescott?