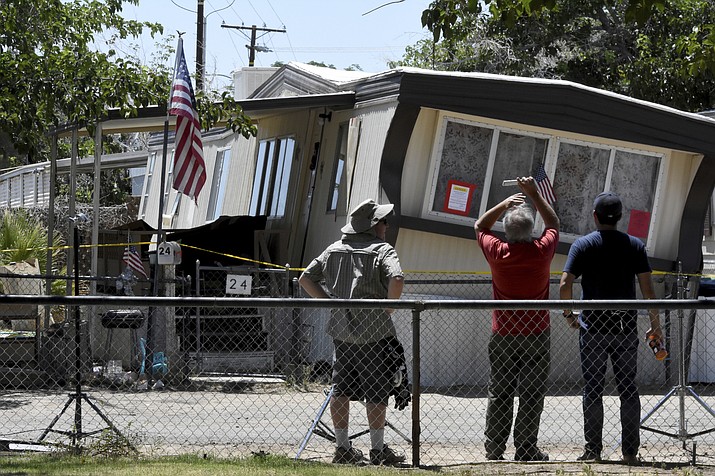 People observe a mobile home in Ridgecrest, Calif. on Friday July 5, 2019. The home was knocked off its foundation in the Fourth of July earthquake. (James Quigg/The Daily Press via AP)

LOS ANGELES (AP) — A magnitude 6.9 earthquake jolted Southern California and was felt as far away as Mexico on Friday night, but no major damage was reported.

The quake, which initially was reported as magnitude 7.1, would be the largest temblor in the region in 20 years and was centered in the same area as a 6.4 quake that hit a day earlier.

The shaker at 8:19 p.m. was centered 11 miles from Ridgecrest, a Mojave Desert town 150 miles away from Los Angeles that saw building damage, fires and several injuries from the earlier quake.

Officials in San Bernardino County reported homes shifting, foundation cracking and retaining walls coming down. One person suffered minor injuries and was being treated by firefighters, they said.

Lucy Jones, a seismologist with the California Institute of Technology’s seismology lab, tweeted that the quake was part of the sequence that produced the earlier quake.

The new jolt was felt in downtown Los Angeles as a rolling motion that seemed to last at least a half-minute. Reports said the quake rocked chandeliers and rattled furniture as far away as Las Vegas, and the U.S. Geological Survey said it was felt in Mexico as well.

Brian Humphrey of the Los Angeles Fire Department told KNX-AM radio says more than 1,000 firefighters were mobilized, but there were no immediate reports of damage or injuries.

The press box at Dodger Stadium lurched for several seconds, and fans in the upper deck appeared to be moving toward the exit. Enrique Hernandez of the Dodgers was at-bat in the bottom of the fourth when the quake occurred. He stepped out of the batter’s box, but it wasn’t clear if that was because of the quake.

An NBA Summer League game in Las Vegas was stopped after the quake. Speakers over the court at the Thomas & Mack Center continued swaying more than 10 minutes after the quake.

The quake came as communities in the Mojave Desert tallied damage and made emergency repairs to cracked roads and broken pipes from the earlier quake.

Hours earlier, seismologists had said that quake had been followed by more than 1,700 aftershocks and that they might continue for years. However, that quake would now be considered a foreshock to the Friday night temblor.

Andrew Lippman, who lives in suburban South Pasadena, was sitting outside and reading the paper when Friday’s quake hit.

“It just started getting stronger and stronger, and I looked into my house and the lamp started to sway. I could see power lines swaying,” he said. “This one seemed 45 (seconds)... I’m still straightening pictures.”

Damage from Thursday’s quake appeared limited to desert areas, although the quake was felt widely. The largest aftershock — magnitude 5.4 — was also felt in Los Angeles before dawn Friday.

At an afternoon news conference, a seismologist had said the odds of a quake of magnitude 6.0 or larger happening in the next few days was only 6 percent and dwindling.