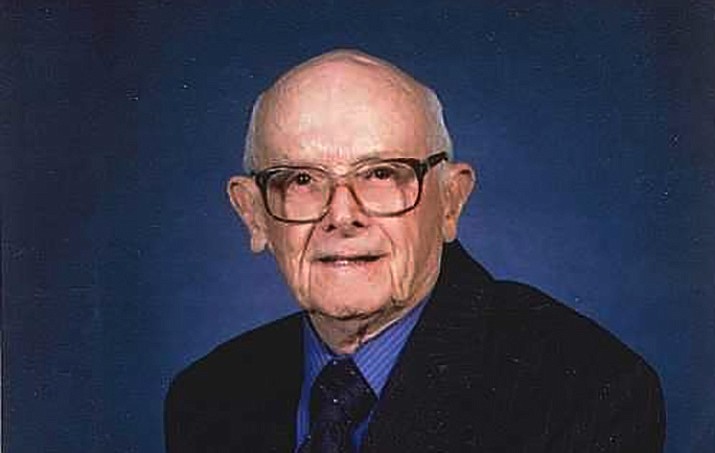 Darrell Frank Googe graduated to his Heavenly home on June 22, 2019, in Prescott, Arizona, at the age of 96. Darrell was born in Alma, Georgia, on the 6th of October 1922 to James Frank Googe and Agatha Jacquelyn Johnson.

His parents divorced and he lived with grandparents, John and Marie Johnson, on their farm outside of Alma from 1924-1930. He attended Big Creek Baptist Church and Bacon Co. Grade School. He moved to Philadelphia, Pennsylvania, in 1930 to live with mother, Agatha and step-father, Ray Angeman.

The family then moved to Cold Point, Pennsylvania. It was there he joined the Boy Scouts in 1934, attaining the rank of Eagle Scout in 1940. He graduated from High School in 1941 and then attended Drexel Institute in Philadelphia.

In 1942 he was drafted into the Army Anti-aircraft Unit and sent to what is now Edwards Air Force Base in California for training. His buddy was dating a girl from California and they set Darrell up with a blind date named Barbara Strohmeyer. They spent three weekends dating and then he was sent to Hawaii to train on the anti-aircraft guns. He kept up writing to Barbara all the time he was there. In 1946 his mother died and he was released from the service to take care of family business in Philadelphia. While there, WWII ended, and he proposed to Barbara in his next letter. She said “Yes” and he sent her engagement ring by mail; they planned the wedding by mail, and then he drove to California, arriving a week before the wedding on June 23, 1946.

Settling in their first home in Inglewood, California, they were blessed with two daughters, Linda, born in 1947, and Jamie, born in 1951. He went to work for Western Electric in 1946 where he reached the position of department chief-area planning, which involved traveling and training other supervisory personnel in Los Angeles and up the West Coast.

He joined the California National Guard in 1948 and served until 1966, attaining the rank of major. In 1970 they moved to Fullerton, California, and when he retired from Western Electric, they moved to Prescott to join their close friends, J.P. and Leila Collier.

Here in Prescott he and Barbara were involved in starting the Blind Center, which helped many visually-impaired people over the years it was open. They both were members of the Telephone Pioneers and volunteers for People Who Care. He loved woodworking and constructing clocks from kits. The family spent vacations visiting all the states over the years, enjoying camping and becoming pretty good water skiers. While they lived in Fullerton, California, the church women of the Lutheran Church that they attended gave him an Honorary Life Membership to the United Lutheran Church Women for his service to the Lutheran church.

He loved his wife, his children, his grandchildren, their spouses, his great-grandchildren. But most of all he loved his Lord and he felt blessed by Him for his lovely family.

Preceding him in death are his parents and his brother Robert who was killed in WWII. He is survived by his wife of 73 years; his daughters, Linda (Farrokh Shehabi) and Jamie; his grandchildren, Soroush Shehabi, Arman Shehabi, Jennifer Orloff, Angelita Villanueva; three great-grandsons and one great-granddaughter.