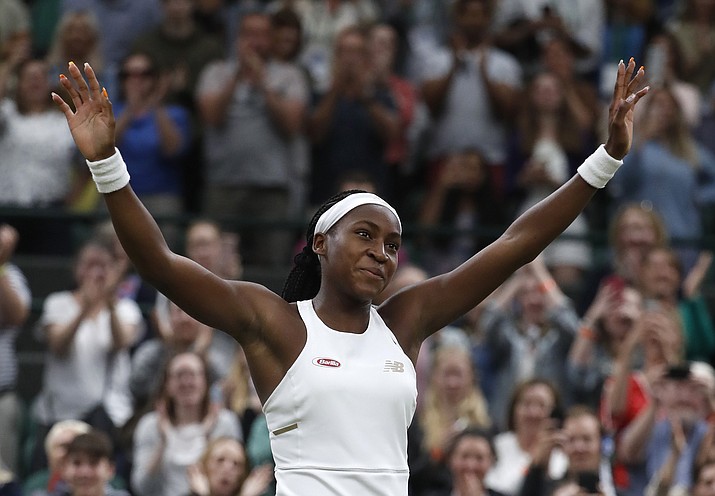 WIMBLEDON, England — There are ways in which Coco Gauff is just like any other 15-year-old American, watching whatever videos YouTube recommends for her, from makeup tutorials to anything that'll make her laugh.

And then there is what happens when Gauff has a tennis racket in her hands, making her unlike most anyone else in the world — now or ever. With big shots and a calm beyond her years, she followed up her upset of Venus Williams by moving into the third round at Wimbledon on Wednesday night via a 6-3, 6-3 victory over Magdalena Rybarikova of Slovakia under a closed roof at No. 1 Court.

"It just shows if you really work hard, you can get where you want to go," said Gauff, who received a wild-card invitation for the qualifying competition, then became the youngest player in the professional era to get through those pre-tournament rounds and reach the main draw. "Last week around this time, I didn't know I was coming here. It just shows you have to be ready for everything."

She certainly has looked ready. Hasn't dropped a set yet.

Might be time to start picking on some opponents her own age.

After eliminating the 39-year-old Williams — who won four of her seven Grand Slam titles before Gauff was born — she needed less than 70 minutes to get past the 30-year-old Rybarikova. Gauff didn't face a break point in the second-round match, and again played cleanly, this time with only 10 unforced errors.

The toughest part for Gauff might have been dealing with everything on the periphery that came with that win over Williams.

"I could lie and say I felt normal," said Gauff, who lives in Florida. "It was honestly so hard, just with social media and everything, trying to focus on my next match, because people are still posting about Venus."

There were direct messages via social media from "a lot of celebrities," including some TV actresses, Gauff said.

Did not seem that way once she stepped on the court.

Next up is 28-year-old Polona Hercog of Slovenia.

What sort of advice has Gauff been getting from her parents? This is, after all, so new to her. Sure, she's been gaining attention for a few years, after reaching the U.S. Open junior final at 13 and winning the French Open junior title at 14. And she is represented by Roger Federer's management company.