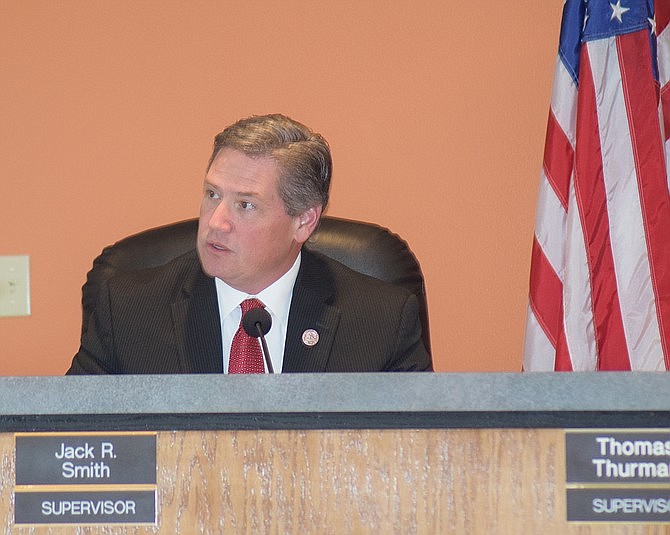 Calling the moment bittersweet, the Yavapai County Board of Supervisors accepted the resignation of Supervisor Jack Smith, effective Sunday, July 7, at its regular meeting Wednesday, July 3. The supervisors also discussed the process and timeline to fill Smith’s seat.

Smith thanked every county employee and the community for their support, and said he wasn’t going far; he is remaining a resident of District 5, which he represented, and would be traveling up and down the hill to Phoenix. He accepted an appointment as Arizona director of the U.S. Department of Agriculture — Rural Development, effective July 8.

For now, the Coffee Chats that Smith conducted will stop, and Supervisor Tom Thurman will take over as county liaison to the state Legislature and the Arizona County Supervisors Association.

County Administrator Phil Bourdon, after discussion with the board’s attorney, set forth the process for replacing Smith. The board is seeking letters of interest and resumes from applicants residing within District 5 from now until 4 p.m. Wednesday, July 10.

In order to qualify for the appointment, applicants must reside and be a registered voter within District 5, be of the same political party as Smith (Republican), and be at least 18 years old.

Bourdon said the board will hold a special meeting at 9 a.m. Monday, July 15, to select the replacement.

During the board meeting, Thurman said a constituent had called asking if owning property within the district qualified him to apply for the position.

County Elections Director Lynn Constabile said applicants can switch their voter registration address in the next week and still qualify, as long as the address is within District 5 boundaries.

Supervisor Craig Brown said having an address that is a vacant lot does not meet the qualifications — the applicant must live within the district, which Constabile confirmed. The voter registration department keeps a history of address changes, she added.

At the supervisors’ request, Constabile said she would keep them updated as applications came in. Those letters and resumes can be mailed to Kim Kapin, Clerk of the Board of Supervisors, 1015 Fair St., Prescott, AZ 86305. They also can be dropped off in Room 310 on the third floor of the administration building, or emailed to clerkofboard.web@yavapai.us. Comments will be accepted until noon, Friday, July 12. The appointment will be effective until the next election in 2020.

District 5 boundaries are found on the Yavapai County website at yavapai.us/district5/district-map.