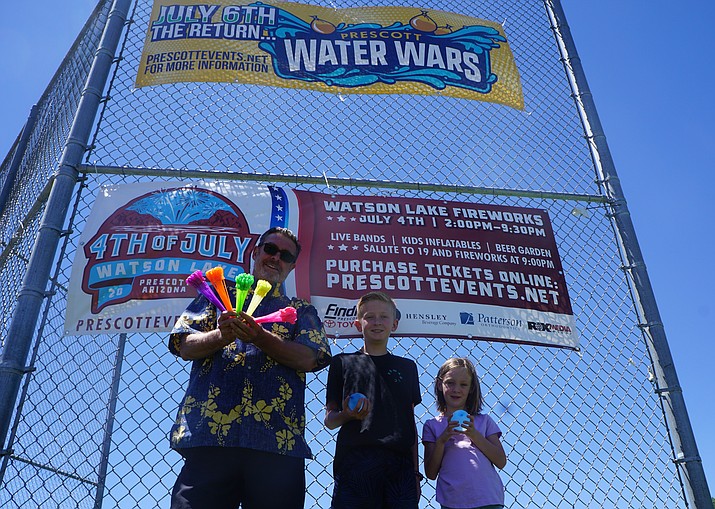 Steve Gottlieb, left, and his children Garrett and Ava check out the water balloon bunches that will be featured at the Water Wars event at the Prescott Mile High Middle School field on Saturday afternoon, July 6. (Cindy Barks/Courier)

For Prescottonians of a certain age, the words “water wars” are sure to conjure up specific memories: Of hot summer nights spent toting Super-Soakers and water balloons through the streets of downtown Prescott.

Throughout portions of the 1980s and 1990s, downtown was not just about rodeo dances and parades. It also was the location of epic water fights that took place among legions of young people — and many older people as well.

After a series of public meetings and even a referendum vote by the public in the late 1990s, the street water-fighting was outlawed by the city in about 1999, ending that chapter in Prescott’s July 4 past.

On Saturday, July 6, a controlled version of the old water wars will be back in downtown Prescott.

Unlike the old water fights, which were largely unrestricted, this year’s event will take place within a fenced area at the Prescott Mile High Middle School field, 300 S. Granite St, Prescott. It also will be a paid event, with a $20 entry fee.

Steve Gottlieb, organizer of the event through his company Eagle Management and Events, along with Prescott Night Out, said the Water Wars are being held instead of the Saturday night Whiskey Row street dance that he previously organized.

Gottlieb said the Water Wars event is intended to bring back the spirit of the old water fights, but in a more controlled fashion.

The event will feature an afternoon of water-balloon play, separated by ages, Gottlieb said. It will run from noon to 5 p.m.

Upon entry, each participant will receive a tote bag with 37 balloons in a bunch. Refills will also be available for purchase.

Prescott Recreation Services Director Joe Baynes said the Water Wars event is a good replacement for the Whiskey Row Street Dance, which had been problematic in the past because of the lengthy closure of Whiskey Row.

Without the street dance in the evening, Baynes said the city will be able to open Whiskey Row up for traffic after the end of the Boot Race — probably by about 3 p.m. Saturday.

“Before, the street stayed closed until midnight,” Baynes said.

City officials say that Gottlieb’s Whiskey Row street dance had conflicted a bit with downtown businesses, as well as with the “World’s Oldest Rodeo” street dance at the BMO Harris Bank parking lot; that event will take place from July 4 through 6 as usual this year.

“I think it’s a really cool idea,” Baynes said of Gottlieb’s Water Wars event. “It’s a good way for kids to burn off some energy and cool off.”

Baynes, who was in Prescott during the old water wars, said, “The old days got a little out of hand.”

A 1999 article in the Daily Courier described the scene: “For several nights during the week of the Fourth, people wielding Super Soaker water guns and buckets of water line the street, while an unending line of slow-moving vehicles passes by. People on foot engage in water battles with those on wheels.”

More information about this year’s Prescott Water Wars is available online at: https://www.facebook.com/events/prescott-mile-high-middle-school/water-wars-2019/434421633803709/