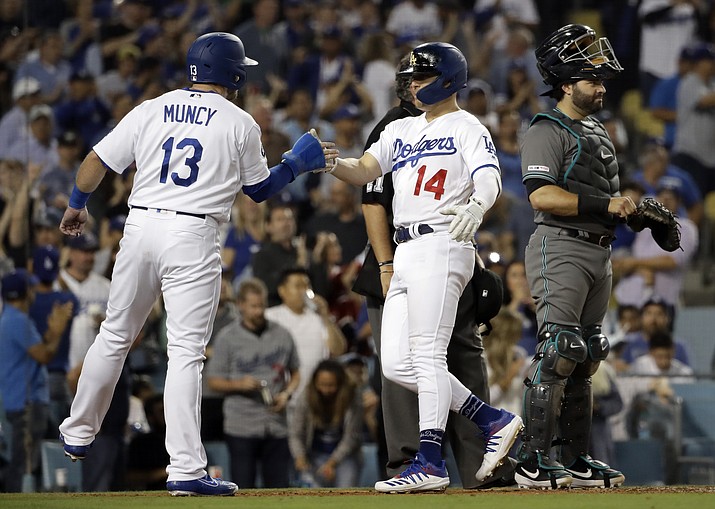 LOS ANGELES — Cody Bellinger's bases-loaded walk — the fifth in a row given up by Arizona's bullpen with two outs — forced in the winning run in the ninth and helped the Los Angeles Dodgers edge the Diamondbacks 5-4 Tuesday night.

Matt Beaty then walked on four pitches to bring in the tying run and keep the bases loaded as Holland exited.

T.J. McFarland nearly hit Bellinger in the elbow, but he jumped out of the way. McFarland walked him on six pitches, forcing in the winning run.

Yimi Garcia (1-2) pitched the ninth to earn the win.

The D-backs blew an early 3-0 lead and staved off scoring threats in the seventh and eighth only to have Holland and McFarland implode in the ninth.

Bellinger beat the shift in the eighth, stroking a double to left center with five D-backs players stacked on the right side of the field. The All-Star was hitless in his first three at-bats after going 7-for-23 on the Dodgers' just completed seven-game trip.

Max Muncy and Enriquè Hernàndez struck out swinging to end the inning.

Taylor tripled to deep center in the seventh and nearly lost his balance rounding second before sliding head-first into third. But Garlick struck out swinging and Verdugo grounded out to pitcher Andrew Chafin to end the inning.

Adam Jones grounded into a fielder's choice to third base, scoring Ketel Marte to put Arizona ahead 4-3 in the fifth.

Nick Ahmed staked the D-backs to a 3-0 lead in the second with a two-run homer that hit the top of the wall in center and bounced out. It came on the first pitch from Ross Stripling.

Stripling produced the Dodgers' first run with a two-out RBI single in the second.

Hernàndez's slugged a two-run homer that tied it 3-all in the fourth.

Arizona starter Taylor Clarke gave up three runs and five hits in 3 2/3 innings. The right-hander struck out one and walked three.

Stripling allowed four runs and seven hits in 4 2/3 innings. He struck out seven and walked two in his eighth start of the season.

Dodgers: 3B Justin Turner was out of the lineup because of residual soreness from being hit on the left elbow by a pitch from Colorado's Chad Bettis a day earlier. X-rays on his elbow and left wrist (hit by a pitch on March 29) were negative. ... OF A.J. Pollock (elbow surgery) and INF Corey Seager (strained left hamstring) are expected to return after the All-Star break. Pollock will have a minor league rehab assignment first, while nothing has been set for Seager. ... INF David Freese (strained left hamstring) will be back Friday or Saturday.

D-backs: RHP Merrill Kelly (7-8, 4.00 ERA) leads National League rookies in innings pitched (99.0) and is second in both wins and strikeouts (79). He's coming off a loss at the Giants last week, when he allowed three runs and seven hits in five innings.