Fireworks on the water: Prescott prepares for Watson Lake Fourth of July 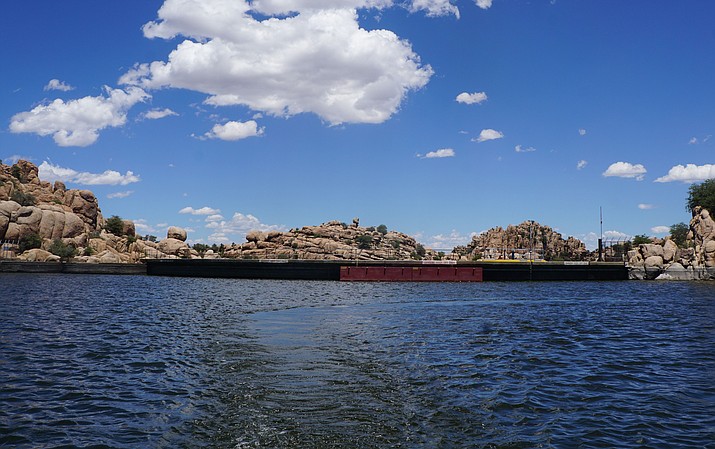 The barge that was used for the recent repair work at the Watson Lake dam will be moved today, July 2, to the lake’s main boat dock in preparation for the on-water fireworks display that is planned for Thursday, July 4. After the fireworks are loaded onto the barge on Wednesday, the barge will be moved to the middle of the lake on the morning of the Fourth of July. The fireworks are scheduled to get underway at about 9 p.m. Thursday, July 4. (Cindy Barks/Courier) 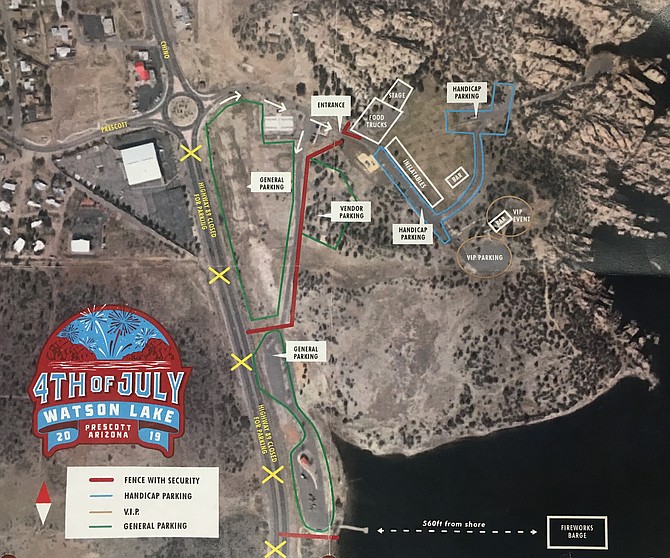 A map of Watson Lake Park and the Willow Lake roundabout area in Prescott for the July 4 holiday fireworks. (City of Prescott/Courtesy)

As many as 8,000 people are expected to gather at Watson Lake Thursday for Prescott’s first on-water July 4 fireworks display in recent memory.

And thousands more are expected to watch from area parks, overlooks, and at their own backyard parties.

Gottlieb said he expects between 5,000 and 8,000 people to come through the gates at the event that will run all afternoon and evening July 4 – starting at 1 p.m. and culminating with the fireworks display at about 9 p.m.

Recreation Services Director Joe Baynes said another 20,000 or more could be watching the fireworks from a range of locations around town.

For those who do not want to attend the lakeside event, Baynes suggested several possible fireworks viewing sites:

• The Willow Lake Park, 1497 Heritage Park Road. The park closes at 10 p.m., but Baynes said the firework display should be ended well before that time. “It should be a great place to view the fireworks, and it has plenty of parking,” Baynes said.

• Private yards around the community. “Because of the size of the fireworks and the (Watson Lake) location, these fireworks should be visible from your home in most parts of Prescott,” Baynes said.

Gottlieb said the fireworks will soar about 900 feet into the air. The display will launch at about 8:55 p.m. with 19 single purple comets to honor the 19 fallen Granite Mountain Hotshots. After a poignant pause, the fireworks are expected to get underway at about 9:02 p.m. 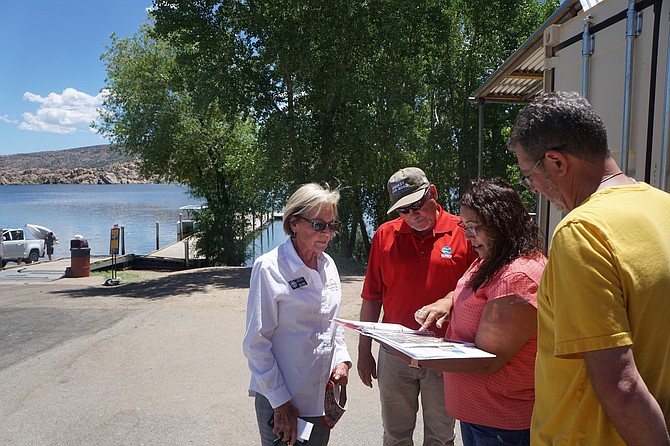 For the people who do opt to attend the Watson Lake event, the city has released several reminders about the details, including:

• Parking: Spaces at Watson Lake are limited, and will be first-come, first-served, for a $10 fee. City officials say about 1,600 spaces will be available on the field at Watson Lake, and more than 200 handicap-accessible spaces are available as well, also for $10 fee.

• Getting there: Highway 89 will be closed between the Willow Lake Road roundabout, and Prescott Lakes Parkway, starting at 2 p.m., until after the fireworks show. The road will re-open as soon as the area is safe for traffic.

• Activities: There will be a range of activities, such as: live music by the 108th Army Band’s jazz, rock, and concert bands, including patriotic music during the fireworks; water slides, inflatables, games and activities; a beer garden (21 and over); food vendors with a variety of options available.

• Watson Lake will be closed to recreation for the entire day, due to preparations for the event.

• The city is asking visitors to observe the following restrictions: No coolers, no canopies, no backpacks, no outside liquids, no outside food or drink, no BBQs, no animals, no firearms, no outside fireworks.

• Lawn chairs and umbrellas for shade are welcomed, and blankets encouraged. All bags are subject to search.

• The city suggests that participants bring a flashlight to navigate after the fireworks show.

This week, barges were standing by at the Watson Lake dam, ready to be moved today, July 2, to Watson Lake’s main boat dock. The barges have remained in place since the dam-repair work that took place this past spring.

On Wednesday, July 3, the fireworks will be loaded onto the barges, after which the area will have around-the-clock security, Gottlieb said.

Then on Thursday morning, the barges will be moved to the middle of the lake in preparation for the show.

Gottlieb notes that a number of area businesses are helping to make the event a reality. “Findlay (Auto Group) is financing this,” he said of the fireworks and other event features.

In addition, Gottlieb mentioned: the Watson Lake-area Casey’s Auto Repair, which allowed for the creation of a second exit from the event; Southwest Industrial Rigging, for the use of the barges; D&O Crane for the use of a crane; and Little Dealer Little Prices for the use of RVs for event staff.