Arizona Downs reverses course, will reopen track thanks to new investor
Horseracing to resume July 20, 21 at venue in Prescott Valley 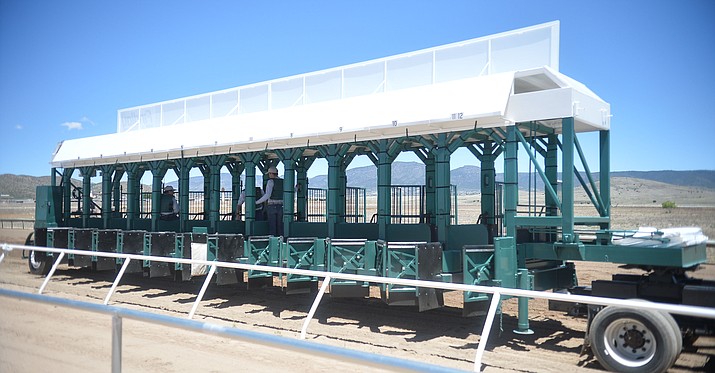 The starting gate moves into position at opening day of Arizona Downs May 24, in Prescott Valley. The racetrack closed after its June 23 races after an investor pulled out, but ownership found a new investor and the track is scheduled to reopen in July to resume racing. (Les Stukenberg/Courier, file)

In a stunning reversal, Arizona Downs in Prescott Valley announced Monday that it would reopen its racetrack for thoroughbred and quarter-horse racing the weekend of July 20 and 21, a little more than a week after track ownership said it would close for the rest of 2019 because of financial woes.

Owners of the track said in a July 1 news release that they have secured an investor who will provide additional money for the racetrack off of Highway 89A so that it can resume operations.

“The investment group loves horse racing, and understands how important a year-round circuit is for the industry,” said Tom Auther, Arizona Downs co-owner and partner, who didn’t immediately disclose the new investor’s name. “They will be incredible business partners.”

The racetrack, in its inaugural season, is scheduled to continue racing every weekend through Labor Day.

Work to refurbish the track and its complex started in early January after it had been closed for the previous nine years due to a bankruptcy of the former Yavapai Downs, 10501 E. Highway 89A, in Prescott Valley. The Yavapai Downs facility was built in 2001 for live racing following the shuttering of the old Prescott Downs at the site of the Prescott Rodeo Grounds, 840 Rodeo Drive.

Track owners say they will offer special prices on concessions for the races on July 20 and 21, and that they will conduct wiener dog races on the 20th.

Gates into the venue are scheduled to open at 10 a.m. on the 20th, with post time for the first race at 1 p.m. General admission costs $2. Children ages 10 and younger get in free. Tickets are available at: azdowns.com.

On June 21, Auther announced in a news release that he was canceling the Downs’ 2019 season after the track’s June 23 races because of financial problems tied to struggles with generating money from off-track betting (OTB).

Arizona Downs officials had blamed the closure on an off-track betting (OTB) dispute between its track and racetrack signal provider Monarch Content Management of Canada and Turf Paradise racetrack in Phoenix. Arizona Downs cited “ongoing issues in the battle for fair and equal access to out-of-state racing signals” for its OTB system.

The July 1 news release states that the track’s new financing allows Arizona Downs to pay for purses distributed to horsemen for the remainder of the 2019 summer meet. The financing also frees up money for the Downs to expand its OTB network to pay purses for the 2020 summer racing season, the release adds.

Arizona Downs’ owners say that they are seeking new restaurants and bars to add to their OTB system, which currently consists of six partners in metro Phoenix, Flagstaff, Lake Havasu and Pinetop-Lakeside.

Since Arizona Downs’ Memorial Day weekend grand opening, ownership says that it has attracted more than 12,500 fans to its weekend live racing events, including thousands of individuals who have never experienced horse racing before.

“We’re thankful to have a new investor who shares our confidence about the potential of year-round horse racing,” Auther said. “We’re already having conversations with several potential OTB partners.”