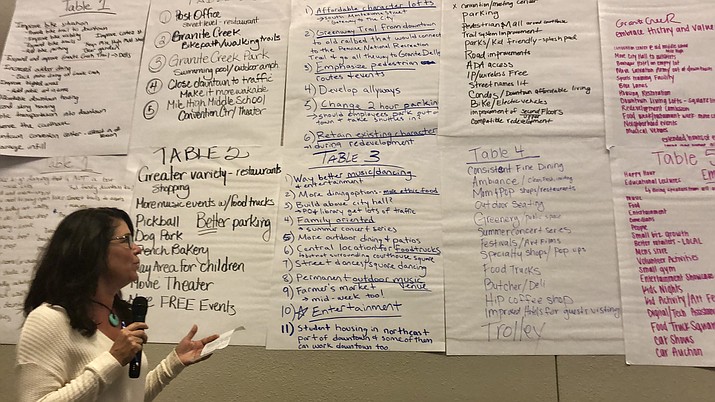 It was the hottest ticket in town, and it wasn’t a rock concert, a beer garden, or a theater performance.

It was the hottest ticket in town, and it wasn’t a rock concert, a beer garden, or a theater performance.

What brought Prescott out en masse Tuesday evening, Jan. 29, was a chance to plan for the future of the downtown area with nationally known town “flipper” Ron Drake.

Nearly 100 Prescott residents – old-timers and newcomers alike – packed into a Yavapai College meeting room to discuss how to revitalize the downtown. (Organizers say at least 100 more wanted to attend but RSVP’d after the event was filled up).

And it turned out the attendees had more than a few things in common. As Drake led the group through a series of questions, similar ideas appeared again and again on the pages that 12 separate discussion groups created and posted on a wall.

For instance, Drake pointed to a consistent desire for better biking access and better use of the Granite Creek Greenways.

Nationally known downtown revitalization expert Ron Drake, third from the right, listens as property owner Robert Broyles, second from the right, talks about the building that houses the Galloping Goose store at the corner of Montezuma and Goodwin streets. Drake and Broyles were among the group of local stakeholders touring downtown properties Monday, Jan. 28, as a part of Drake’s “Flip this town” evaluation. (Cindy Barks/Courier)

Food was another common theme. Taco bars, pho restaurants, an Italian deli, a permanent food-truck space, and redeveloping the main floor of the old Goodwin Street Post Office as a restaurant were among the ideas that emerged.

“We need more variety in our food choices,” Herbert told the crowd, adding that most cities have choices such as Ethiopian food, Vietnamese food, and sushi options – all within walking distance. “So, more ethnic food,” she said.

The need for more outdoor patios was another common theme. In fact, Drake expressed surprise that downtown Prescott did not take better advantage of its mild climate with more outdoor dining.

“I’m personally shocked at that; you guys have the opportunity for some of the best outdoor dining in the country – literally, that’s not an exaggeration,” Drake said. “So put chairs and tables right on your sidewalks.”

Some of the groups also suggested that Prescott should better use its alleys – perhaps as spots for food trucks or recurring farmers’ markets.

Another popular idea focused on creating more living spaces, such as lofts, in the downtown area. Other ideas included: more music and entertainment venues; continued preservation of Prescott’s history and hometown feel; and bringing a greater variety of businesses to the downtown.

The Tuesday night visioning session was one in a series of meetings that took place this week as a part of a partnership between the City of Prescott, the Prescott Chamber of Commerce, the Prescott Downtown Partnership, and Arizona Public Service (APS) to bring Drake to Prescott.

A nationally known downtown revitalization expert and podcast personality of “Flip this Town, Drake was in town from Jan. 28 to 30.

Noting that he conducts similar workshops around the country, Drake lauded the enthusiastic response from Prescott for the Tuesday night visioning event.

The event was published “in the paper one time, and boom, this is how many said they wanted to come,” Drake told the packed room. “There are a lot of people who are upset they aren’t here tonight.”

He added: “I told Sheri (Heiney, president of the Prescott Chamber of Commerce) at the beginning, ‘I hope you can get 100 people; it’s hard to get 100 people.’ But not in this town. We learned that.”

Prescott Community Outreach John Heiney said the 96 slots available for the visioning session were filled up soon after the Daily Courier published the initial story about the event on Jan. 5. Attendance required an RSVP to the Chamber.

Subsequently, Heiney said, another 100 or so people expressed interest in attending but were told the event was full to capacity.

In conclusion Tuesday night, Drake told the crowd that most of the ideas that came up are doable.

After a closer evaluation of the ideas, he said, a report would be formulated on things that can happen almost immediately, as well as the more long-term goals. “A lot of this stuff can happen within five years,” Drake said.

Sheri Heiney added that the local partners would continue to work toward the goals. “We’re going to carry this through,” she said.

More information is available on the “Flip this town” Facebook page: https://www.facebook.com/FlipThisTown/.