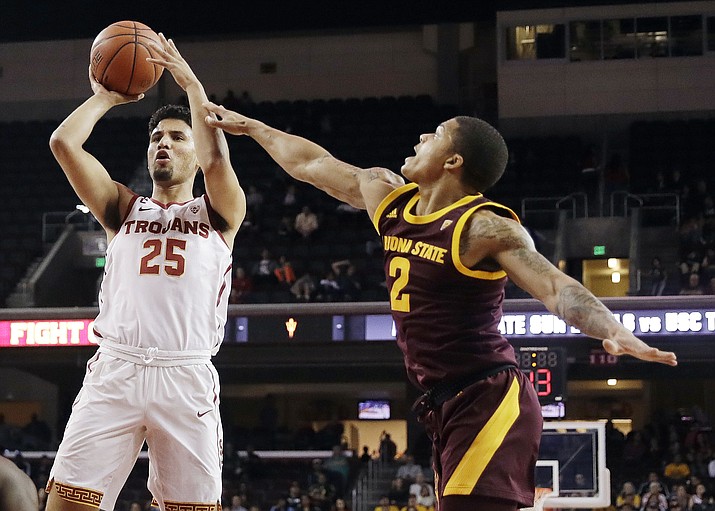 LOS ANGELES — Bennie Boatwright scored 17 points and made the game-winning 3-pointer with 14 seconds remaining to lead USC to a 69-67 victory over Arizona State on Saturday.

Arizona State’s Remy Martin missed a 3-pointer on the ensuing trip before Jonah Mathews got the rebound. Mathews missed the front end of a bonus and the Sun Devils called a timeout with 0.8 seconds remaining. Luguentz Dort missed a 3-pointer at the buzzer.

(12-8, 5-2) scored 13 straight points. USC was 6 of 8 from the field and forced five turnovers as Thornton and Rakocevic scored four apiece. Rakocevic’s layup off a Thornton assist gave the Trojans a 52-44 lead with 13:33 remaining.

USC led 62-57 with 6:31 remaining when the Sun Devils took the lead with eight straight points by Martin, including a pair of 3-pointers.

Arizona State led 38-35 at the half as there were six ties and five lead changes in the first 20 minutes.

Arizona State: The Sun Devils remain one of three Pac-12 teams that hasn’t posted a road sweep since the conference expanded in 2011-12. They have not swept the Los Angeles portion of the trip since 1987.

USC: The Trojans have won three straight and find themselves among a group tied for second and two games behind Washington.

BATTLE OF THE BOARDS

The game was a matchup of the top two rebounders in the Pac-12. Cheatham, who came into the game leading the conference with 10.2 boards per game, finished with 14 and got his eighth double-double of the season while Rakocevic, who was second at 9.8, had eight.

USC: Hits the road for its next two, starting against Washington on Wednesday.