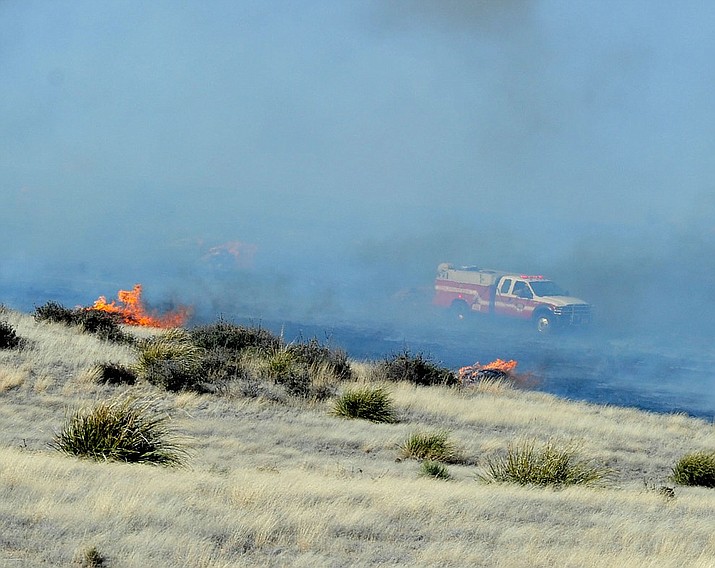 A type 6 engine from Central Arizona Fire & Medical works the interior of the Prescott Valley wildland fire along the north side of Highway 89A between Glassford Hill Road and Granite Dells Parkway on Monday, Jan. 21, 2019. (Les Stukenberg/Courier)

The Arizona Department of Forestry and Fire Management (ADFFM) continues its prescribed burning and fuel mitigation projects, but its federal counterparts with the National Forest Service did not during the shutdown.

Federal projects stopped for the 35 days of the partial shutdown, Tiffany Davila, Public Affairs Outreach officer with state forestry confirmed, because of the federal furlough of employees.

They have been, however, “willing and able to respond to a fire,” Davila said Jan. 24, adding that one ADFFM firefighter worked on the Prescott Valley Fire that burned about 450 acres of grassland this past week.

“Obviously, that person was working without pay that day,” she said.

Weather conditions this time of year act in favor for the Prescott area as wetter vegetation mean the wildfire danger is at the “none” level. Fire watchtowers are closed as usual for the winter.

“We’re kind of in that safer zone right now. It is the end of January, and yeah, we could have a fire, but it’s a milder time for us right now,” Davila said.

She said if the shutdown had continued for another 30 or 60 days, the state would “start seeing some problems.”

Theoretically, the same could be said for if another shutdown happens.

The federal shutdown — the longest in history — closed firefighting training, she said. Although the state does offer a lot of refresher courses for existing firefighters, specialized training was not available through federal programs.

Toward the end of February and into March, agencies are getting ready to hire their seasonal firefighters.

“I can’t speak of the National Forest Service how that might impact them. They hire first and then we hire,” Davila said.

A shutdown could cause them to postpone hiring. She said, however, “We’re OK at this point.”

Proactive measures by the state, federal and local agencies helped prevent a possibly disastrous wildfire season in 2018, Davila stated in a Jan. 24 news release. The forecast looked bleak because of the lack of moisture and severe drought conditions across the state.

Arizona had 2,000 fires called into the ADFFM’s Interagency Dispatch Center this past year. Of those, 68 percent were human-caused. Of the 2,205 fires in 2017, 72 percent were started by humans.

But the decrease in number of acres burned is what is most significant. In 2018, more than 165,000 acres burned across the state, as compared to 420,000 the previous year.

“Shortly after our fire activity died down last summer, we jumped right back into project work to eliminate hazardous fuels around the state. We also increased our prescribed burning projects, and have so far burned nearly 6,000 acres of debris piles,” said State Fire Management Officer John Truett.

Over the next several months, fuels mitigation remains the state agency’s top priority, he added.

Firefighters respond to nearly 50 wildfires over Fourth of July weekend
Arizona has had fewer wildfires than last year, but the blazes are bigger
Stubbs Fire quadruples in size from earlier in week
Arizona forestry department sends 150 firefighters to California to battle wildfires
University of Arizona aiding in prevention of mega forest fires