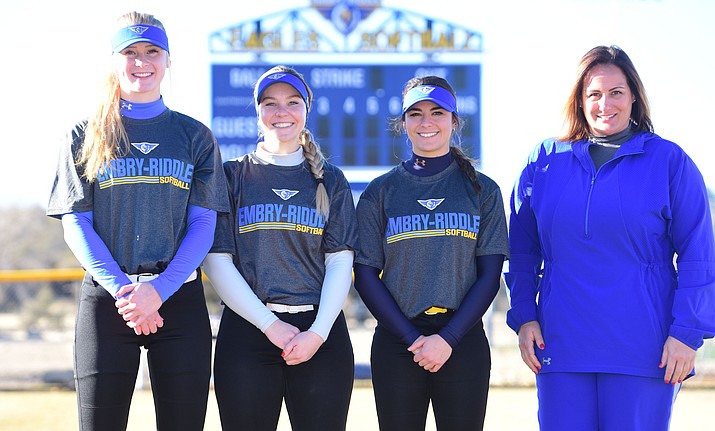 PRESCOTT — The 2019 Embry-Riddle softball team is coming off their best finish in school history a year ago when they finished over .500 for the first time at 24-23.

In the off-season the Eagles were able to keep 12 returners, but added five new freshman and maybe more importantly, a new head coach, Christie Ambrosi.

Experience is often key in sports and the Eagles will be returning a key cog from their offense last season with National Fast Pitch Softball Association All-American Bailey Critchlow, who was second on the team with a .420 batting average in her first season in Prescott.

Critchlow was second in the Cal Pac in runs scored with 47 and finished top-10 in a handful of categories including, homeruns and triples.

However, a concern as we head into 2019 for the Eagles is the lack of depth at the pitcher position with only two healthy arms currently on the roster. Carly Carlsen and Mikaeli Davidson are the two that will be required to carry the load for them this season, but both players and coaches seem to have a positive outlook on the situation.

“We only have two pitchers,” Bailey Critchlow said. “I pitched in the fall but I hurt my elbow, so as for right now I am not throwing, so it’s kind of a concern. This next weekend we go and play eight games so that’s going to be our huge test, but they’re great so they are going to be just fine.”

Ambrosi added, “This year we have our two pitchers with Bailey as our backup and as long as they can stay healthy, I think we’ll do great things.”

The Eagles are flying high after notching 24 wins in 2018, which is seven games better than their previous record of wins in a season of 17. So with the change at coach and a team of veterans and young players, the Eagles have their sights set on the postseason and are striving to go even further than just the Cal Pac Tournament.

“I think I’m definitely trying to bring a championship culture,” Ambrosi said. “I think this team has the talent to win, a lot more than they have in the past and to go into postseason. So my goal for this team is to go into postseason, to win the conference and go further than the Cal Pac tournament. I think I bring some experience with creating a championship culture, that they haven’t been taught. They have the drive, they work hard, they’re great kids, they just don’t know how to put that last puzzle piece into place. I think I bring that to this team.”

Following the 2018 campaign the Eagles went on a national search to find a new softball coach and Ambrosi was the choice. Ambrosi was a two-time All-American outfielder, who won a national championship in 1999, in addition to being a three-time All-Pac 10 (now Pac-12) selection at UCLA. Outside of her college career, Ambrosi was also a member of the 2000 U.S. Olympic team that won a gold medal and she owned a pair of softball clinics in the Kansas City area where she was an instructor before coming to Prescott.

With her experience on the field and teaching the sport of softball, Ambrosi hopes to change the mindset of the players here in Prescott, and feels like her team of coaches has the chance to do that.

“We go zero to 100, go big or go home is my personality,” Ambrosi said. “I think the kids need to dream big because you are what you think and if you don’t think you can do it then you won’t do it. I’m really trying to teach these kids that there’s nothing out of their reach with preparation, hard work and the mindset.”

Ambrosi continued, “I see them every day work hard, put in the time and hours and they have the passion. They just need the leadership and I think the coaching staff and I have that this year and I think that they have a different confidence level from what they’ve told me that they’ve had in the past.”

The Eagles open their season at noon Saturday, Jan. 26, at Arizona Christian, before they head out on a California road trip that sees them play eight games in four days from Feb. 1-4. The Eagles will have their first home game in just under a month, when they host Arizona Christian at 2 p.m. on Feb. 22.