Texting while driving coming to an end — statewide? 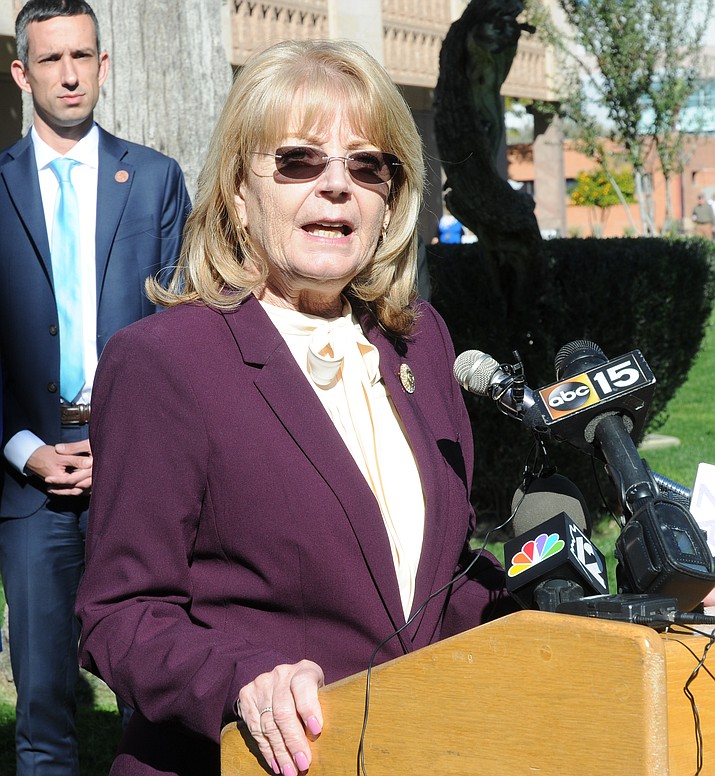 PHOENIX — The days of texting while driving or even chatting with a phone next to your ear may soon be at an end.

And the reason could be the death of a police officer at the hands of a texting motorist.

A bipartisan group of legislators is pushing a plan that would finally ban the practice in Arizona. That effort, if successful, would end Arizona’s distinction of being one of only two states in the country that allows most motorists to type and dial while driving.

Talking would not be totally off limits if SB 1165 becomes law. But the only permitted use would be if a phone or tablet were mounted to the dash and if were, for all intents and purposes, operated only on a hands-free basis.

But to get approval for even that, proponents had to agree that it applies only to new motorists in the first six months of getting licensed. And it even forbids police officers from stopping a driver solely because he or she was observed on the phone.

What seems to have breathed new life into the movement was the Jan. 8 death of Clayton Townsend. The five-year veteran of the Salt River Police Department was conducting a traffic stop when he was struck and killed by a motorist who admitted to texting at the time.

“We have the momentum,’’ said Sen. Kate Brophy McGee, R-Phoenix.

“We have tragedy from which great good can happen if we make it so,” she continued. “It’s time for the Legislature to stand up and do our jobs and send the governor a bill that establishes a statewide policy that is proven to save lives.”

Senate President Karen Fann said 21 cities and counties in the state already have adopted some type of ban. But the Prescott Republican said the state needs a single standard to ensure that both motorists and police know what is and is not permitted.

One of the communities that has had a law since early 2017 is Oro Valley. Police Chief Daniel Sharp said the law works, especially when people know it’s being enforced. For the first eight months, officers issued only warnings. Close to 1,200 were given to motorists who were spotted holding a cell phone.

When enforcement really began, the town issued only 78 citations in the following four months. Sharp said the community has not had a fatality since. “We’ve seen good results,” he said. And, if nothing else, Sharp said a statewide law sends an important message: “If we allow something, that means we condone it. And I don’t believe anybody would stand and say that they condone having a phone in your hand and utilizing it when you’re doing the job of driving.”

But not everyone is convinced that the answer is SB 1165, which creates a specific law aimed at the use of cell phones, tablets and other electronic devices.

Sen. J.D. Mesnard, R-Chandler, is promoting his own SB 1141 to create a new offense of “distracted driving.” It would make it illegal to engage “in any activity that is not related to the actual operation of the motor vehicle in a manner that interferes with the safe operation.” But even then, a violation would occur only if the vehicle is operated in a manner “that is an immediate hazard to another person ... or property” or that the driver does not “exercise reasonable control of a motor vehicle under the circumstances.”

“The issue that is unsafe is the distraction,” Mesnard said, whether it’s chatting on the phone or eating a burger. “So my bill goes after that issue. And it’s a bigger issue than just telephones.”

Fann was unimpressed. “We know that distracted driving bills do not work,” she said. “There are too many loopholes, there are too many issues with something like that,” adding that the state needs to “hone down on the real problem.”

But Mesnard said he believes there is more support for his plan, at least among Republicans, notwithstanding the backing of SB 1165 by party members Brophy McGee, Fann and Heather Carter of Cave Creek.

The bill is not an absolute ban on cell phone use.

Motorists could still have a phone mounted on a vehicle windshield, dashboard or console and use it in what would be a virtual hands-free manner, operated only with “the motion of a single swipe or tap of the operator’s finger.”

Under the terms of the bill, a first-time violation would result in a fine of from $75 to $149; subsequent violations would cost drives at least $150, with a $250 cap.

One provision of the proposal specifically bars police from demanding to see or inspect a motorist’s phone to see if he or she was actually talking or texting.

But Sharp said his experience in Oro Valley convinces him that the law still can be enforced.

“We’re not saying somebody’s texting or making a phone call or answering an email,’’ he said. “We’re saying if it’s in your hand, that’s the violation.’’

The legislation does contain some provisions which could help blunt opposition.

One prohibits any conviction from being used by the Motor Vehicle Division in any way that could add points to a driver’s license that could result in suspension or revocation. And the other bars insurance companies from considering a conviction to raise someone’s insurance rates or cancel coverage.

Fann, who guided the teen-texting bill through the Senate two years ago, conceded that she made a promise at that time that she would not pursue a full-blown ban on texting. But she said that was only to convince the speaker of the House -- who happened to be Mesnard -- to let her measure come to the floor for a vote.

“That doesn’t mean I haven’t supported it all along,’’ she said. “It just means I made an agreement so I could at least get the teenage bill through.’’

At this point no date has been set for a hearing.