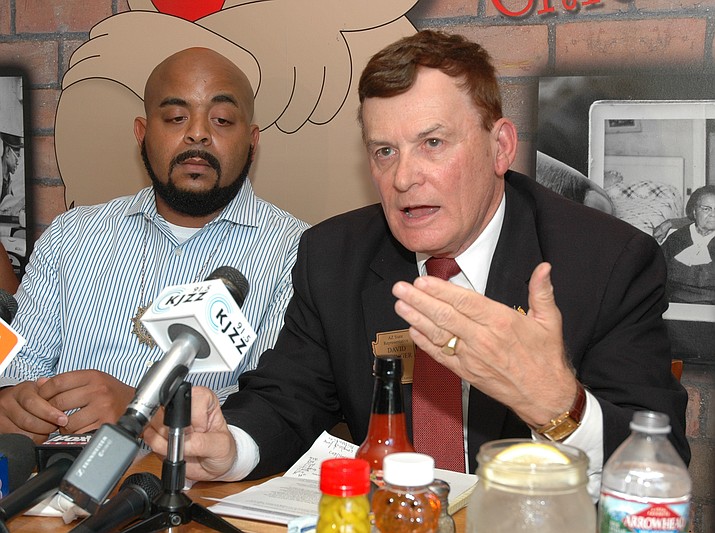 PHOENIX - A Prescott Republican lawmaker whose comments about race and immigration caused a stir last year publicly apologized Thursday on the House floor.

From Stringer, text of his apology on the House floor:

I want you to know that, as my colleagues in the House, I believe you are entitled to an explanation and an apology.

I want to assure all of you of my deep personal respect. I would never intentionally say or do anything that would make me doubt my respect for you or make you feel uncomfortable working with me.

Many of you have shared your feelings about my remarks. And I have heard you.

I personally continue to welcome any opportunity to meet with you to express your, discuss your concerns.

Issues that relate to race and ethnicity are very sensitive in any setting. I believe, on reflection, I have a duty to apologize to you as my colleagues.

I want you to know that I'm sorry.

But David Stringer did not take back any of his comments or suggest that he is having second thoughts.

"As my colleagues in the House, I believe you are entitled to an explanation and an apology," he said, reading from prepared text. "I would never intentionally say or do anything that would make you doubt my respect for you or make you feel uncomfortable working with me."

Stringer made no specific reference to the comments that caused officials within his own party, including Gov. Doug Ducey, to seek his resignation. Instead he simply acknowledged their volatile nature.

"Issues that relate to race and ethnicity are very sensitive in any setting," Stringer said.

"I believe that, on reflection, I have a duty to apologize to you as my colleagues," he continued, saying he also was apologizing to staffers and "to the public."

Stringer came under scrutiny last year for a speech to the Republican Men's Forum in Prescott warning that immigration "represents an existential threat to the United States" and needs to be curtailed before the country is irrevocably altered. There also were other comments about integration and how only people from European countries fully assimilate.

Since that time, Stringer was re-elected by a healthy margin, getting more than twice as many votes as the lone Democrat in the race for the two seats from the district, though seatmate Noel Campbell, R-Prescott, outpolled him.

But shortly after winning a new two-year term, Stringer was taped making remarks to students at Arizona State University, saying assimilation doesn't work with African-Americans and other racial groups "because they don't melt in, they don't blend in, they always look different."

He also said there is a "pretty significant burden" on Arizona taxpayers for having to teach English to students who come to school without that being their first language and said that Hispanics vote Democratic because they want more immigration to bring "more of their co-religionists, their own people like them, into the country."

Stringer declined after Thursday's floor speech to talk about his apology and what it did - and did not - include and whether he believes any of his remarks last year were off-base.

The second round of comments resulted in House Speaker Rusty Bowers ousting Stringer as the chair of what was to be a newly created Sentencing and Recidivism Reform Committee, a committee that Stringer had asked the new speaker to create.

"Rep. Stringer's comments are vile and won't be tolerated," Bowers said in taking that action. "These comments render him incapable of performing his duties as chair."

"Mr. Stringer, words hurt at times, and to different people more than others," he said. "I'm grateful that you recognized that, and that you would be willing to say so in this room."

Bowers said when he took over as speaker he hoped to improve the reputation of the House and the Legislature in general. He told House members they need to be careful with their words.

"They mean more," Bowers said. "Because what we say does not just cast color on our own self but all of our colleagues or the reputation of this body."

An aide to Bowers said late Thursday there has been no discussion about whether to undo the punishment the speaker imposed.

Last year, after the first comments, Stringer sought to put the issue behind him by telling a group of African-Americans that he is working on issues of interest to their community and his comments about immigration and assimilation were misconstrued or misunderstood.

But then, like now, he did not apologize for anything he said, blaming the dust-up on a "Democrat hit piece" that excerpted 51 seconds of the speech he gave in Prescott.

"It distorted my remarks and I think misled and, unfortunately, offended a lot of people," Stringer said in June. "So if there are people in this room who were offended, I am going to apologize for making statements that allowed someone else to excerpt them, misrepresent them to the community."

In seeking to explain what he was saying, though, Stringer repeated his stance that rapid immigration is "very, very destructive and destabilizing to any country." And he acknowledged that in a separate interview with Capitol Media Services he said that the melting pot that is the United States works best for people of European descent because "they don't have any accents, they're indistinguishable."

Click HERE to be redirected to the Courier story that includes both the 51-second video and the 17 minute, 23 second video of Stringer's speech in June.

The controversy has resulted in others calling for Stringer's resignation, including the Prescott City Council. Also, the East Valley NAACP called for a travel boycott of Prescott in the wake of Stringer's comments, among other stories on dCourier.com.

How do you feel about Rep. Stringer's apology? Click here to take our reader poll.