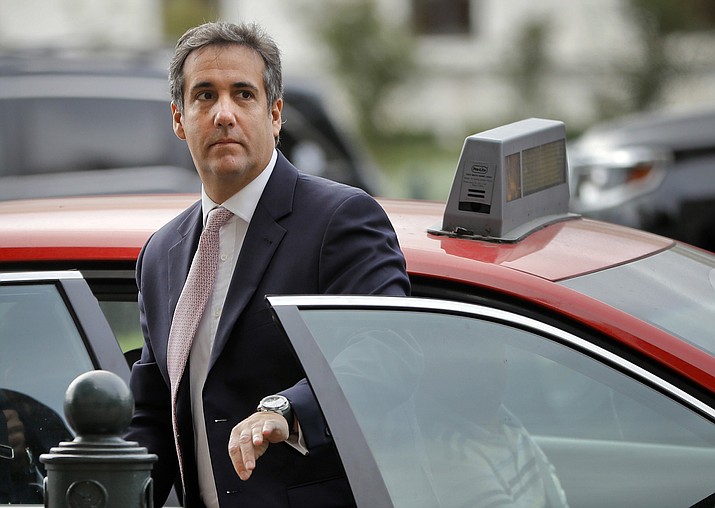 In this Sept. 19, 2017, file photo, Michael Cohen, President Donald Trump's personal attorney, steps out of a cab during his arrival on Capitol Hill in Washington. Cohen won't appear as scheduled before the House Oversight and Reform Committee on Feb. 7, 2019. Cohen's adviser Lanny Davis says the delay is on the advice of Cohen's lawyers because Cohen's still cooperating in special counsel Robert Mueller's Russia investigation. (Pablo Martinez Monsivais/AP, file)

The development comes one day after Cohen postponed his public testimony to a House committee.

Lanny Davis, a lawyer for Cohen, disclosed the subpoena from the Senate intelligence committee in a one-sentence statement and later told The Associated Press in a text message that "we will comply and hope to agree upon reasonable terms, ground rules and a date."

Cohen is set to begin a three-year prison sentence in March.

The Senate committee did not immediately confirm the subpoena, but any interview with Cohen would almost certainly take place in private, in keeping with how the committee generally conducts Russia-related hearings.

Cohen earlier this week delayed his Feb. 7 appearance before the House Committee on Oversight and Reform on the advice of his legal team, citing ongoing cooperation in special counsel Robert Mueller's Russia investigation and threats against his family. Trump, along with his attorney Rudy Giuliani, has publicly urged the Justice Department to investigate Cohen's father-in-law , insinuating that Cohen's relative was part of some unspecified criminal activity.

"If he wants to criticize Cohen, he can," Davis said. "Obviously, picking on his family publicly is a way of silencing him or intimidating him. And certainly he has engendered great fear in his extended family, which is why we postponed it."

In an interview Thursday, Davis said the House should take an immediate vote on censuring Trump "as a step before an impeachment investigation," and he pushed for a criminal investigation of Giuliani involving allegations of obstruction, witness intimidation and witness tampering.

The decision to postpone the House interview pushed back the chance of a public airing on additional details of Cohen's relationship with Trump, including hush-money payments that Cohen has admitted helping arrange for two women who say they had sex with the president. Trump has denied the allegation.

Democrats have suggested they may subpoena Cohen to compel his testimony and the committee's chairman, Democratic Rep. Elijah Cummings of Maryland, said Cohen could be brought from prison to appear before Congress.

"We will get his testimony," Cummings said.

CNN was first to report the existence of the subpoena.