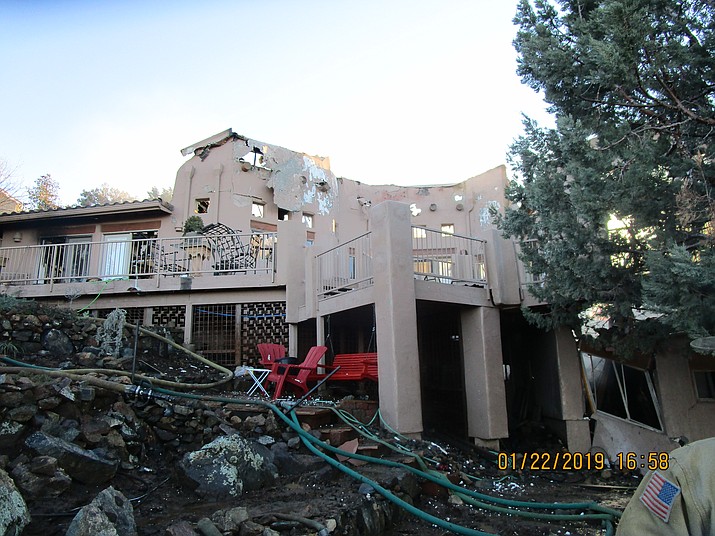 The hollow ruins of a home in the 3100 block of Rainbow Ridge Drive in Prescott that all but burned to the ground Tuesday, Jan. 22.

Damage to a Prescott home that all but burned to the ground Tuesday, Jan. 22, is estimated to exceed $1 million, officials said.

Smoke was reported coming from the home on Rainbow Ridge Drive in The Ranch subdivision on the east side of Prescott around noon Tuesday.

Two engine companies, a truck company, a battalion chief, Prescott Police Department, an ambulance and other support personnel were dispatched.

Responding units were able to see smoke from a distance and upgraded the assignment to a “working fire,” which added an additional engine and chief officer, said Prescott Fire Department Marshal Don Devendorf.

The first unit arrived to find smoke coming from the eaves of a roughly 4,000-square-foot, multi-level home. Smoke was also coming out of the roof vents and an open window, Devedorf said. The occupants of the home had already evacuated.

Firefighters first surveyed the entire perimeter of the home, which was difficult since the house was built on the side of a hill surrounded by rocks. They then went inside to search for the fire and found a lot of heat and smoke, but no visible flames, Devendorf said.

A second survey of the home’s perimeter revealed fire in the crawl space below the home.

“As the crawlspace fire was knocked down, fire began coming from different rooms and walls and ceilings in the home, as well as the attic,” Devendorf said.

Additional firefighter units were called in an attempt to bring the fire under control. Water was continuously applied using hand lines and aerial streams from ladder trucks, but the fire was too embedded in the structure to be fully extinguished, Devendorf said.

After about an hour, crews were ordered to move away from the structure as exterior walls were beginning to buckle. More units and personnel were ordered until there were seven engine companies, three truck companies and multiple support staff from both the Prescott Fire Department and the Central Arizona Fire and Medical Authority engaged in the firefight.

“At one point, over 2,000 gallons of water per minute was being applied to the structure to try to extinguish the flames,” Devendorf said.

Four more hours passed before the majority of the fire was knocked down, Devendorf said. However, multiple fires were still burning under the collapsed floors and roof that were difficult and unsafe to get to with handheld hose lines.

Once the sun went down, the entire area was covered with ice making any movement around the home hazardous to firefighters. A ladder truck was left on the scene overnight and remained there into Wednesday afternoon, Jan. 23, attempting to fully extinguish the fire 26 hours after its start.

The occupant of the home stated that he was working on the top floor of the home when his smoke alarms started sounding, Devendorf said. He went to investigate the lower level and found it to be full of smoke, so he got out and called 911.

No one — including firefighters — was injured because of the fire, Devendorf said.

The cause of the fire is still undetermined.

“It is known that the fire started on the lower level of the building from the homeowner’s report and where the flames were initially found,” Devendorf said. “The investigation will take an extended amount of time since the building has all collapsed into the crawlspace below the home.”