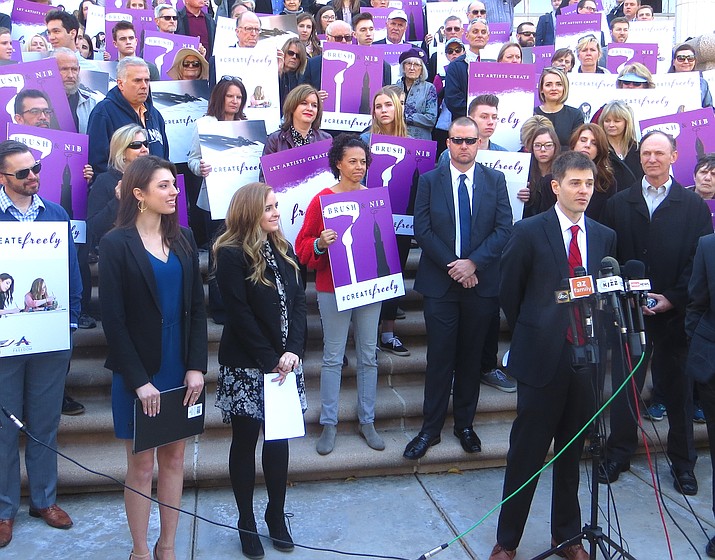 Joanna Duka, left, and business partner Breanna Koski listen Tuesday to their attorney, Jonathan Scruggs, explain the legal arguments he made to the Supreme Court about why they are constitutionally entitled to refuse to produce custom wedding invitations for same-sex couples. (Howard Fischer/Capitol Media Services)

PHOENIX — The legal question of when businesses can refuse to provide services to same-sex couples could come down to how the Arizona Supreme Court defines what is “celebratory language."

Attorney Jonathan Scruggs who represents the owners of the Brush & Nib Studio said his clients do provide off-the-shelf items for weddings, like generic invitations, place cards and table numbers. And he told the justices on Tuesday that the women who do calligraphy also would not turn away gay clients who want them to design something else for gays, even down to invitations to a memorial for the same-sex spouse of someone else.

What they will not to, said Scruggs, is create anything that he said celebrates the wedding of a same-sex couple. That, he said, runs contrary to their religious beliefs that marriage is solely between one man and one woman.

And that, Scruggs said, eliminates all wedding invitations.

“All wedding invitations the studio creates contain celebratory text about the wedding,’’ he said. “And that is enough for this court to say, ‘You can’t compel that message.’ ‘’

But Eric Fraser, an assistant Phoenix city attorney, argued that Joanna Duka and Breanna Koski, the owners of the studio, are not being asked to celebrate anyone’s wedding.

He said they are in the business of designing wedding invitations and similar items. And he said the Phoenix anti-discrimination ordinance they are challenging simply says if you provide a service to the public, you can’t refuse that service to someone based solely on sexual orientation.

“Once Brush & Nib has decided to offer a particular type of invitation to the general public, the one thing it can’t do is when somebody calls making the request, they can’t have the sole test of whether they’re going to make the invitation be, ‘What sex is your spouse?’ or ‘What sex is your finance,’ ‘’ Fraser told the court.

“And if that’s the one thing they need to know before they decide whether to make the invitation or not, then it’s not about the message,’’ he continued. “That’s about who the person is.’’

It is that issue that is the basis of the Phoenix ordinance which makes it a crime to discriminate based on race, gender, religion or sexual orientation -- and why the women want a declaration that they can’t be punished for refusing to make certain products for same-sex couples.

At the hearing Tuesday, several of the justices questioned Scruggs’ contention that the women were being forced to convey a message that runs contrary to their religious beliefs.

Chief Justice Scott Bales asked what’s the difference in designing a wedding invitation for Pat and Terry if it turns out that both are of the same sex. Bales wanted Scruggs to explain why it would be OK for the studio owners to turn the gay couple away, given that the invitations and other products would be identical, regardless of the gender of the two people who want to buy the items.

Justice Andrew Gould indicated he was troubled by the idea that the Phoenix anti-discrimination ordinance was effectively forcing the women to say something that runs contrary to their religious beliefs.

“Certainly an individual has the autonomy over the words that they write and the pictures that they paint,’’ he said. And in this case, Gould said, the invitation asks someone to go to a same sex wedding.

“That is a ceremony that Brush & Nib objects to,’’ Gould said. “They very fact of creating words ‘you are invited to this ceremony’ that I object to, aren’t you compelling them ... to invite somebody to a ceremony that they strongly object to?’’

But Fraser said that presumes that the invitation is somehow different for a same-sex wedding than for a heterosexual couple.

“In all other senses, other than the names, the invitation, the words that they’re writing are identical,’’ he said. Fraser did say that nothing in the ordinance prohibits the women from publicly announcing - and even posting in their shop - that they are opposed to same-sex marriages. And he even told Gould that the women could put up derogatory statements about same-sex couples.

What they cannot announce, Fraser said, is that the will not provide the services to gays, or that gay customers will be treated differently.

Justice Clint Bolick questioned how far a person’s religious beliefs could allow them to refuse to serve customers.

“That would be entirely different,’’ Scruggs said. And if there were such a case, he said, “the court would have to consider it when it comes.’’

Bolick also expressed concern that a violation of the ordinance is punishable by a fine of up to $2,500 a day plus up to six months in jail. He said that kind of penalty could have a “chilling effect’’ on the ability of business owners to exercise their free speech rights.

Fraser said no one has ever gone to jail for violating the ordinance. And he told Bolick that the size of the penalty is legally irrelevant to whether the ordinance is legal and enforceable.

Any ruling on the legality of the Phoenix ordinance would affect similar ordinances in Tucson, Tempe and Flagstaff.

The justices gave no indication when they will rule.