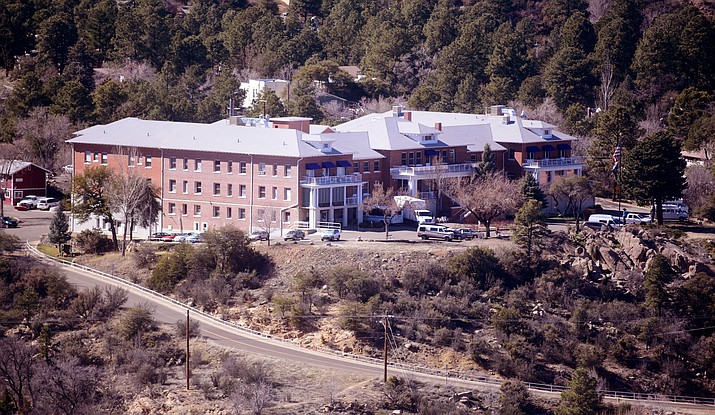 A week-long quarantine was imposed at the Arizona Pioneers’ Home in Prescott just after the first of the year because of a nasty gastrointestinal virus that impacted 43 patients and 32 staff members.

What started with one staff member falling ill just a few days after Christmas quickly spiraled into a mini-epidemic among the staff and patients such that the wisest move was to isolate patients in their rooms, order any staff with symptoms of nausea, vomiting and diarrhea to stay home and serve meals on disposable trays, said Director of Housing Lisa Jones. To break the boredom, patients were able to play crossword puzzles or other such solitary activities, she said.

The precautionary protocols also required posting notices around the building and discouraging visitors for fear of spreading the virus even further, or bringing germs in that might then hurt the patients, most of whom are elderly.

For more than a century, Arizona Pioneers’ Home has operated as a continuing care retirement home. The home operates from appropriations of approximately $5 million annually through state land trusts, a miners’ hospital fund, state charitable funds and the general fund; the residents pay a portion of their care based on their income, which is deposited back into the general fund, according to its website.

The home current has 95 patients, with residents living independently or receiving various levels of assisted living up to long-term, skilled care.

This is the first time Jones recalls the home having to impose a full quarantine due to such an illness. The state Health Department is still inspecting samples so a firm diagnosis of norovirus has yet to be made, but Jones said all indications are of that virus behind the illness that impacted so many staff and patients.

Though the virus was certainly unpleasant and uncomfortable for all who succumbed, Jones said it was not life-threatening. The biggest issue was to ensure that the ill staff and patients did not become dehydrated and that the entire facility was properly disinfected, she said.

Infection disease specialists said the key cleansing ingredient for this virus is bleach.

“It happened very quickly,” Jones said after the first couple staff and patients complained of symptoms.

As for visitors, Jones said they did not prohibit them but certainly discouraged them for fear of worsening conditions for patients or spreading the virus to anyone who might come into contact with the virus. This particular virus is not airborne, but can be contracted through physical contact, she said.

Signs were posted throughout the facility stating anyone entering did so “at their own risk,” Jones said.

Yavapai Regional Medical Center Infection Interventionist Kim Horn said the protocols put in place at the Arizona Pioneers’ Home seem quite appropriate given how contagious such a virus can be. She said the hospital has not had any serious episodes of that particular virus, or influenza, a respiratory illness, so far this infection season. That could change in the next couple months, so staff remain vigilant to protect everyone, Horn said.

Her best advice: regular and often handwashing for everybody.

At the hospital, and in most care facilities, Horn said anyone who is not in peak health shape should stay away. If they must visit a staff member or patient, they should wear a mask and be sure to wash their hands frequently. Hospital staff have posted warning notices in all the entrances on both their east and west campuses. Hand sanitizer machines are located throughout both locations, as well as bathrooms where people are advised to always wash their hands with soap and hot water.

The hospital, too, discourages children younger than 12 from visiting because they tend to be more prone to transmitting germs, with certain sensitive areas of the hospital more strict than others, Horn said.

Personal hygiene during flu season is important, particularly when people are in congregate settings, such as schools, medical facilities, busy office and enclosed shopping areas, Horn and other infection specialists suggest.

While day-to-day activities have resumed at the Arizona Pioneers’ Home — the quarantine was lifted on Jan. 7 — staff, patients, and even visitors, now seem to have a heightened awareness about how one little germ can cause such disruption and disturbance to so many, Horn said.

“We’re happy to be back to our routine,” Jones said. “I was shocked we got this.”

Editor's Note - This article has been updated to clarify how the home is funded.