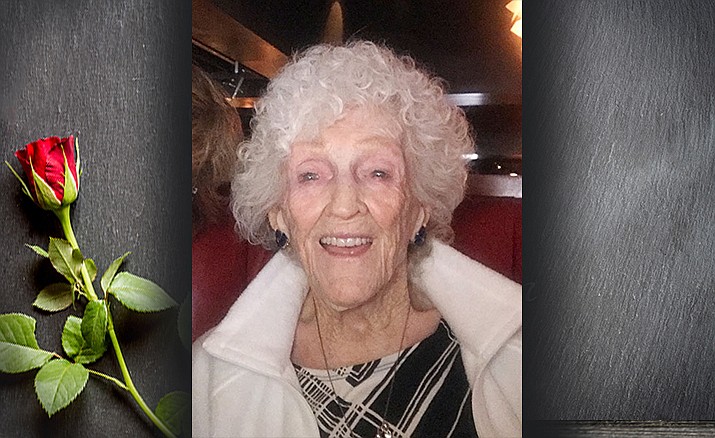 Edith (Edie) Hope Miller was born May 30, 1924, in Sacramento, California, to Anna and Daniel Nuckolls. She was one of six children.

Edie’s husband, JC Miller, passed in 2000. She is survived by her son, Randall Miller, and wife, Sharon, of Oklahoma City, Oklahoma; her daughter, Glona Nance, and her husband, Versel, of El Mirage Arizona; and her daughter, Lucinda O’Connell, and husband, Craig, of Scottsdale, Arizona. She is survived by nine grandchildren: Ryan, Andrew, and Adam Miller; Rob, Sarah and Rachel Nance; Christian, Kelly and Scott O’Connell; and four great-grandchildren: Magnus and Lorelei Miller; and Troy and Chris Nance.

Edie married JC Miller in Sacramento, California, on Jan. 9, 1944. JC was in the Navy and a Pearl Harbor Survivor.

They were stationed in Monterey, California, where their son, Randy, and daughter, Glona, were born. They were then transferred to Honolulu for two years. Next, they went to Long Beach, California, and then were assigned to Columbus, Ohio. In 1954 they moved to Escondido, California, where her husband, JC, retired from the Navy at Miramar Naval Air Station. In 1955 her third child, Lucinda, was born in Escondido.

In her youth she took tap dancing lessons and even into her nineties would break out into a little tap dance for you. During World War II she danced in a troop that performed at USO events.

Her Christian faith began late in the 1940s through the prayers and witness of her mother-in-law, Alberta Miller. Throughout the years she was always involved teaching Sunday School classes and helping out around the church. Edie was a very good singer and often sang in churches. She always had a song in her heart. Her life motto was a scripture from Philippians 4:4: “Rejoice in the Lord always; and again I say rejoice!”

From California they moved to Washington, where she worked as an activities director at a nursing home and retirement center. In 1999 they moved to Prescott, Arizona, to be closer to family in the Phoenix area. In 2000 her husband passed away and she has lived on her own until her recent poor health.

Edie loved to walk at the mall and have breakfast at the Wildflower Bread Company. After she gave up driving, her friends would pick her up and take her there. When the Wildflower moved to their new location they arranged a ride for Edie so that she would be there for the grand opening. In 2003 she began attending Willow Hills Baptist Church. Her church family has been such a blessing and help to her over the years. At the Wildflower she made many friends who were so kind and helpful. Her family is so grateful to all her friends!

Edie lived with chronic heart disease for many years. Just before Christmas her health began a rapid decline. She passed away on the 11th of January 2019 at Avant One Assisted Living Home in Scottsdale, Arizona.