Fireplace ashes ignite back porch, cause estimated $10K in damage to Prescott home 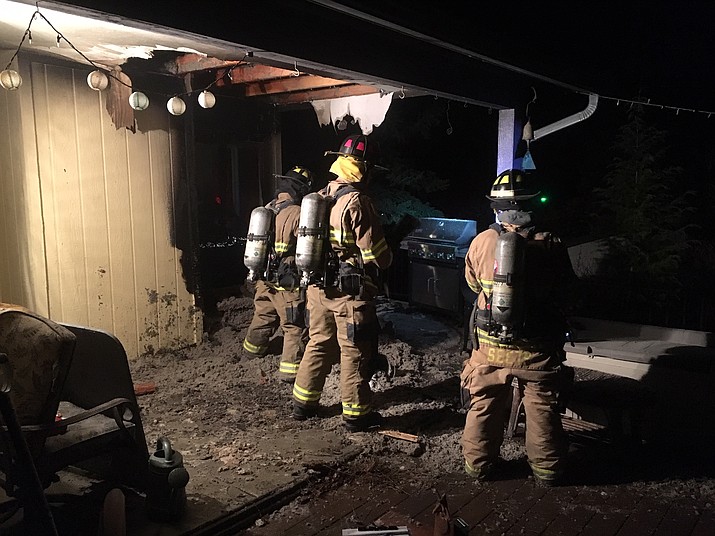 Members of the Prescott Fire Department stand near a fire-damaged porch from a Prescott home Saturday, Jan. 11, 2019. (PFD/Courtesy)

On Saturday at approximately 12:30 a.m., the Prescott Regional Communications Center received a 911 call reporting a fire on the back porch of a home on Sequoia Drive in the Prescott Heights area on the north side of Prescott. Three engine companies, a truck company, a battalion chief, the Prescott Police Department, an ambulance, and other support personnel were dispatched.

The first arriving unit arrived to find an orange glow coming from behind the home. Crews accessed the back yard and found a pile of fire wood on the back patio of the home on fire. The flames were burning up the back wall of the home and up across the ceiling of the outside patio, and had just breached a window into the home.

Crews immediately put water on the fire knocking it down before it could do any damage to the inside of the structure. The wood pile and surroundings materials were removed from the patio, wet down to assure they were out, and the ceiling was pulled to assure that no fire had entered the attic. Thermal imaging cameras were used to confirm that there was no fire in the walls and the fire was called out.

The occupant of the home stated that she had removed the cold ashes from her fireplace the night before, placing them in a paper bag, and then into a steel bucket, before taking them outside and placing the bucket in the area of the wood pile.

After going to sleep, she awoke and saw lights flickering in her living room. She investigated and found the fire on her back porch. She immediately called 911 and retrieved a fire extinguisher from her garage and discharged it on the fire, significantly decreasing the flames. She then dumped a pot of water on the pile just before the first fire engine arrived. No smoke alarms sounded in the home as the fire and smoke were all outside the structure.

There were no injuries to firefighters or civilians. Damage was estimated at $10,000 to the buildings and contents.

The investigation showed that the fire started in the area where the ashes had been placed in the bucket next to the wood pile. While the occupant was correct in her choice of steel bucket to place the ashes in, often “cold” ashes can still have hot embers in them that can cause a fire.

Ashes are not truly safe until they have been mixed with water and stirred to become a slurry. The slurry mix should be allowed to sit away from combustibles and then disposed of once they are cold and wet. Only after making them wet and cold should they be disposed of by dumping them in a trash container or used in the garden as fertilizer.

As stated, the homeowner was able to keep the fire in check by using a fire extinguisher. Readers are cautioned to only use a fire extinguisher in the home when smoke and heat from the fire are not a danger to them, and never having the fire between them and an exit.

This would be a good time to assure that your home fire extinguisher is in good working order and easily accessible if needed.