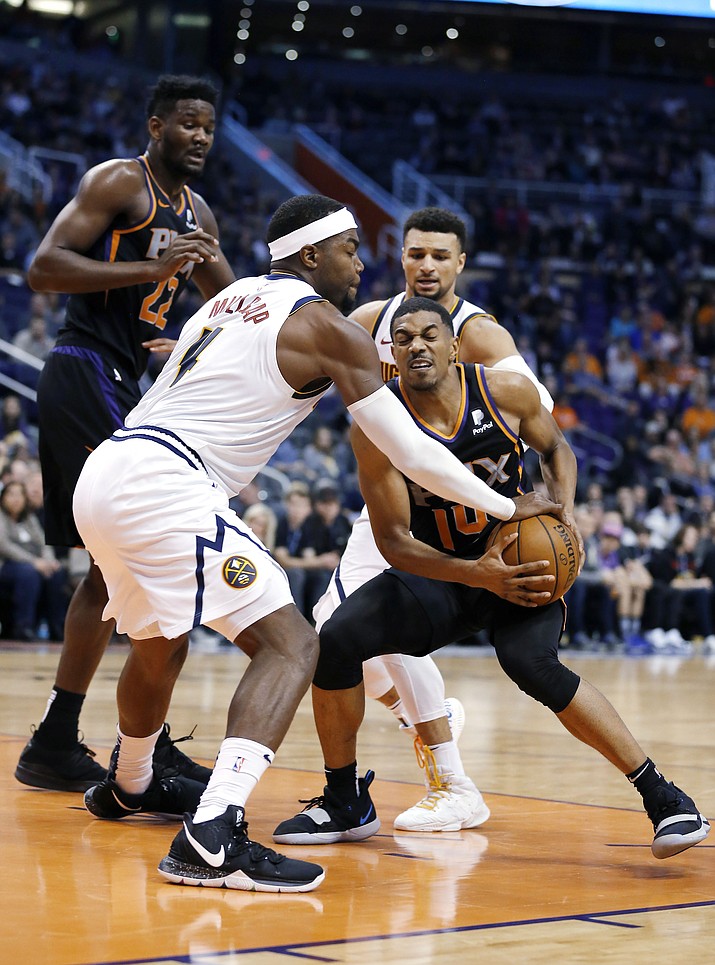 Denver Nuggets forward Paul Millsap (4) and Phoenix Suns guard De’Anthony Melton (14) vie for the ball during the second half during an NBA basketball game, Saturday, Jan. 12, 2019, in Phoenix. The Suns defeated the Nuggets 102-93. (Rick Scuteri/AP)

PHOENIX — Kelly Oubre Jr. matched his career high with 26 points for the second time in three games and the Phoenix Suns beat the Denver Nuggets 102-93 on Saturday night, a victory for the team with the worst record in the Western Conference over the team with the best.

Deandre Ayton added 23 points and 13 rebounds for the Suns, who have won two of three with Devin Booker sidelined with back spasms. Oubre also tied his career best with 11 rebounds.

Nikola Jokic had 21 points and 10 rebounds for the Nuggets. Malik Beasley scored 20 points.

Denver fell to just a half-game ahead of Golden State for best record in the West.

The Suns took the lead for good late in the first quarter and were up by as many as 16 in the second and 18 in the third. Denver never got closer than seven points in the fourth quarter. 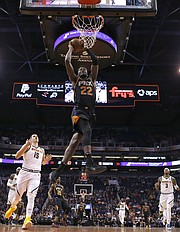 Phoenix Suns center Deandre Ayton (22) dunks against the Denver Nuggets in the second half during an NBA basketball game, Saturday, Jan. 12, 2019, in Phoenix. (AP Photo/Rick Scuteri)

Phoenix took its biggest lead at 68-50 early in the third quarter before Denver rallied to get to single digits. Jokic made one of two free throws to cut it to 74-66 with 2:57 left in the third but Oubre banked in a 3 at the third-quarter buzzer to put the Suns up 81-69 entering the fourth.

A 9-0 run, capped by Jamal Murray’s 3-pointer, cut the Phoenix lead to 93-86 with 4:24 left. But Richaun Holmes made a short jumper in the lane and De’Anthony Melton sank two from the foul line to boost it to 97-86 with 3:11 remaining. The Nuggets never got closer than eight after that.

Suns: Oubre scored 26 against Sacramento on Tuesday night. ... Phoenix is 3-10 without Booker this season. ... Jamal Crawford missed the game for personal reasons. ... Ayton had his 26th double-double and 10th in the last 15 games.

Suns: at Indiana on Tuesday.