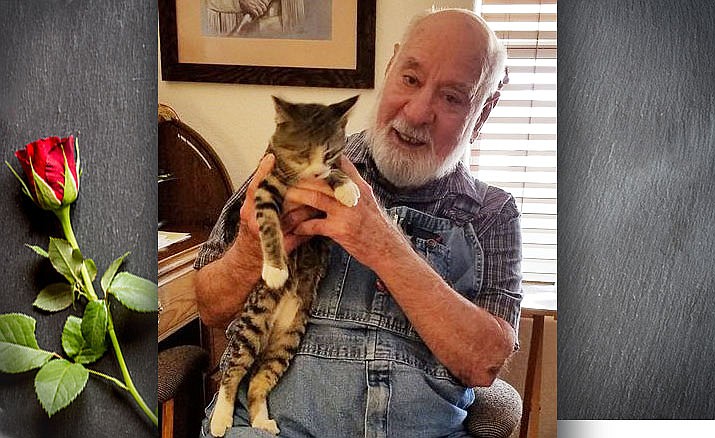 Joseph Butitta, 95, passed peacefully Dec. 30, 2018, at Marley House in Prescott, Arizona, with his devoted daughter, Mary Jo, at his side.

Joe, known to many as “Pop,” will be fondly remembered as a dynamic, ambitious and generous man who loved people, children and animals. He was a lifetime member of the Bill Williams Mountain Men, as well as the Marine Corps League Copper State Detachment 906.

Joe was born March 12, 1923, in Streator, Illinois, to Peter and Beatrice “Stella” (Rizzo) Butitta. He enlisted as a Marine in December 1942 and was deployed to the South Pacific, Guam.

On June 8, 1946, he married Alys “Jeanne” Roenneburg in Rockford, Illinois. Together they had four children, Mary Jo Butitta (John Murray) of Dewey, Arizona, Deborah Butitta, Charles M. Butitta, both of Prescott, Arizona, and Joseph P. Butitta; as well as five grandchildren, 11 great-grandchildren and one great-great-grandson.

In 1970, Joe and Jeanne moved to Prescott, Arizona, where he built and co-owned JD’s Saloon. After selling the saloon he opened Joe’s Stable on North Montezuma Street, Prescott. Joe was also known in his later years for enjoying estate, yard and garage sales. He would, in turn, place these items in a resale store. He eventually added metal recycling to his repertoire.

A Celebration of Life will take place the same day from 1 to 4 p.m., at Matt’s Saloon, 112 S. Montezuma St., Prescott, with food catered by LaBruzza’s Italian Restaurant. Internment of Joe’s ashes will take place in the spring, in a new section of wall at the Prescott National Cemetery.

A special heartfelt thank you to Maggie’s Hospice and Marley House, both of Prescott, for their compassionate and loving care during Pop’s final days on earth.