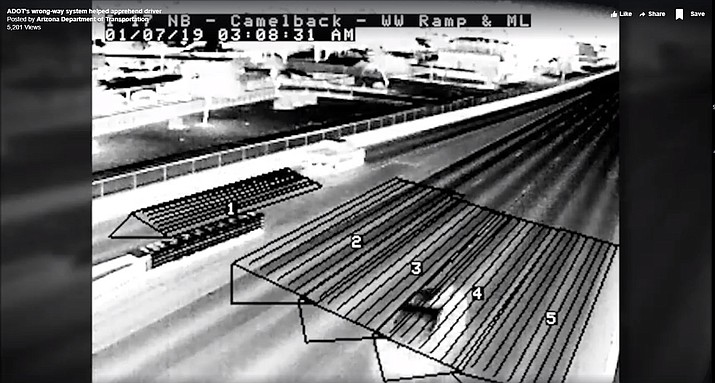 The Arizona Department of Transportation is crediting its thermal camera-based wrong-way vehicle detection system with stopping an accident from happening on a Phoenix freeway. (ADOT video screenshot)

Early Monday, ADOT's Interstate 17 thermal camera-based system alerted ADOT, DPS to a wrong-way truck. The driver was taken into custody near the Interstate 10 'Stack.' These videos show the vehicle entering the freeway at Camelback and heading south in the northbound lanes until state troopers halted it. Read all about it: https://bit.ly/2SC4Un6

Posted by Arizona Department of Transportation on Monday, January 7, 2019

PHOENIX — The Arizona Department of Transportation is crediting its thermal camera-based wrong-way vehicle detection system with stopping an accident from happening on a Phoenix freeway.

They say the detection system alerted authorities and other motorists early Monday about a pickup truck being driven the wrong way on Interstate 17. 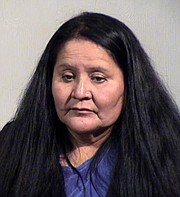 State Department of Public Safety troopers took the driver, identified as 59-year-old Diane Begay, was booked into jail on charges of aggravated DUI and endangerment. Begay made her initial court appearance before a jailhouse judge. into custody and nobody was injured.

ADOT officials say the thermal camera detected the truck getting on the freeway about 3 a.m. and DPS troopers were dispatched quickly.

ADOT officials say the system has been operational for a year and has recorded detections of more than 45 wrong-way vehicles so far.