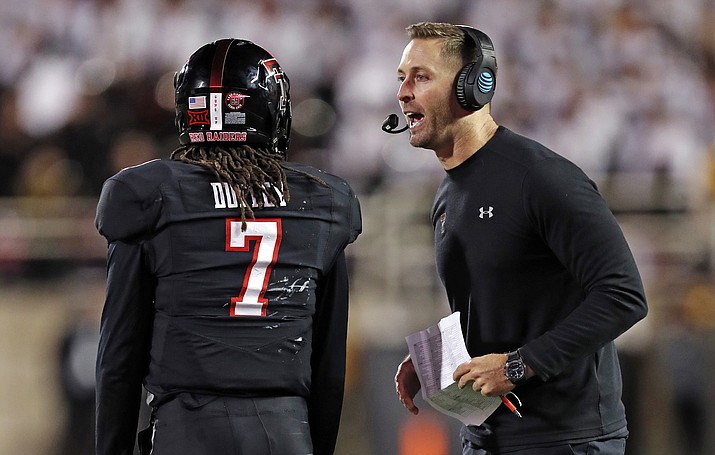 In this Saturday, Nov. 3, 2018, file photo, Texas Tech coach Kliff Kingsbury talks to quarterback Jett Duffey (7) during a timeout in the second half of an NCAA college football game against Oklahoma in Lubbock, Texas. Duffey is expected to get his second start on Saturday against Texas. (Brad Tollefson/AP, file)

The Cardinals announced the hiring Tuesday after a long interview earlier in the day, saying Kingsbury had agreed to terms on a four-year contract with a team option for a fifth. He was to be introduced at a news conference at the team's training facility in Tempe on Wednesday.

Kingsbury was fired after going 35-40 in six seasons at Texas Tech, but his teams were known for their high-scoring performances. His prize pupil in those days was current Kansas City Chiefs All-Pro quarterback Patrick Mahomes. Tuesday's hiring came barely a month after Kingsbury was hired as offensive coordinator at USC.

Kingsbury, also a former offensive coordinator at Texas A&M where he worked with Johnny Manziel, replaces Steve Wilks, who was fired after going an NFL-worst 3-13 in his one season in Arizona.

That means Kingsbury will take over a team with the No. 1 overall draft pick, along with a bevy of other picks and lots of salary cap space.

After a one-year experiment with a defense-oriented coach in Wilks, Cardinals president Michael Bidwill acknowledged he got that hire wrong and vowed to get this one right. The Cardinals hope the hire can match the magic that happened when Sean McVay was hired by the Los Angeles Rams.

Arizona's move is back to an offense-centered coach, a philosophy that worked well in the previous hire of Bruce Arians, who won 50 games in five seasons before retiring after the 2017 season.

And Bidwill's latest choice is a risk, given that the 39-year-old Kingsbury has no NFL coaching experience and no record of success in terms of wins and losses at the college level.

He does, however, bring unquestioned knowledge of successful offenses and in working with young quarterbacks. Under Kingsbury's tutelage, both Case Keenum and Mahomes led the nation in passing as college quarterbacks.

"Yeah, I think he can be a great NFL coach," Mahomes said Tuesday before the hiring was announced. "He has the work ethic. He has the passion for the game. I know that he loves the sport. So I know he'll be able to relate to quarterbacks. He would put in the work and now it's just about him finding where he needs to be at."

Kingsbury was let go after six seasons at Texas Tech and joined the USC staff as offensive coordinator on Dec. 5. His quick departure will leave the Trojans scrambling for a replacement.

Kingsbury's challenge now will be to build a staff. He particularly needs a strong coordinator for a defense that had its share of troubles last year trying to switch from a 3-4 to 4-3 scheme.

The new coach inherits a team that finished last in the NFL in all major offensive categories last year. Rosen, who as a rookie took over as starter four games into the season, had an up-and-down year with no significant improvement.

Playing behind a makeshift offensive line decimated by injuries, he wound up last among quarterbacks who played regularly, completing 55 percent of his passes for 2,278 yards and 11 touchdowns with 14 intercepts and a 66.7 quarterback rating.

Rosen, who was picked 10th overall in last year's draft, is probably the No. 1 reason Kingsbury got the job.

The Cardinals' record last year was their worst in 18 years and matched the worst since the franchise moved to the desert from St. Louis in 1988.

Cardinals take a chance on 'bright mind' of Kingsbury
USC's Helton "happy for" Kingsbury after Cardinals swoop in
New-look Cardinals open camp with rookie coach
Cardinals create glut at quarterback by selecting Murray
Cardinals being coy about who will go at No. 1 overall