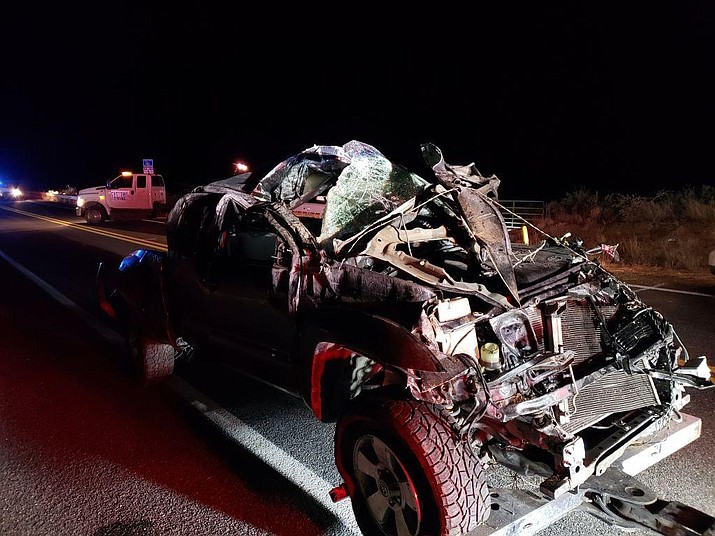 A 26-year-old Prescott woman's body was located about 100 yards from this wreckage, a black 2007 Toyota Tacoma, Friday night, Jan. 4, 2019. She died in an apparent rollover on Iron Springs Road, near the Skull Valley Cemetery. (YCSO/Courtesy)

At around 10 p.m. Friday, Jan. 4, YCSO deputies were dispatched to a collision on Iron Springs Road, milemarker 12.

Upon arrival, deputies contacted the original caller who reported locating a woman’s body apparently ejected from a vehicle after a collision, the YCSO reported. Deputies examined the body and found no signs of life likely because of severe visible upper body injuries.

Medical personnel arrived shortly thereafter and pronounced her deceased. She was identified as Shannon Smith, 26, of Prescott. The vehicle involved was a black 2007 Toyota Tacoma.

Smith’s body was found more than 100 yards from her vehicle. Deputies checked the area to confirm there were no other injured people involved in the collision, according to the news release. Initial indications, based on physical evidence at the scene, are that Smith’s vehicle crossed the roadway’s center line, struck a guard rail and rolled several times. It appears Smith was not wearing a seat belt.

It is not known if alcohol was a factor, but no signs of alcohol or other indications of impairment were observed on scene, D’Evelyn said. Smith’s body was released to the Medical Examiner’s Office for follow-up investigation.

Deputies noted that earlier in the evening, around 9:30 p.m., they received an attempt to locate message from the Prescott Police Department regarding an erratic driver in a black Toyota Tacoma, possibly DUI.

A collision investigation team from the Sheriff’s Office is currently handling a review of the circumstances and evidence to determine cause.

Next of kin has been notified.