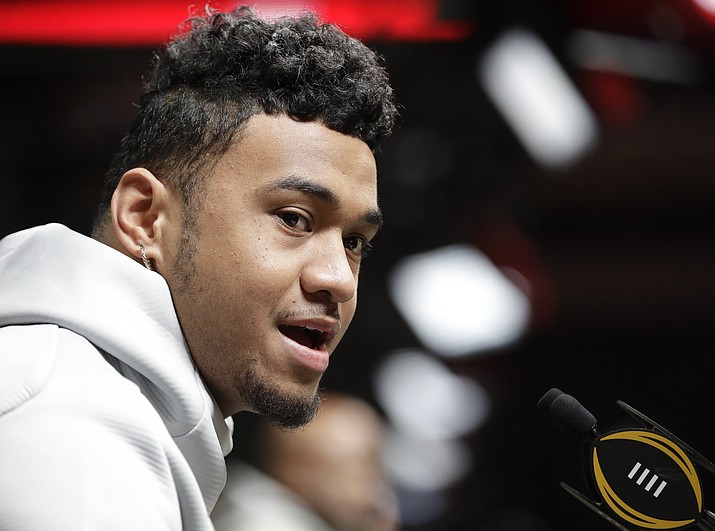 “I can only say we’re continuing to get better,” Tagovailoa said at media day on Saturday. “It’s trying to maintain the feeling of it feeling good. Just one more game then I can rest.”

Tagovailoa had surgery on his ankle after he injured it against Georgia in the SEC title game. He has been receiving almost nonstop treatment on his ankle since.

Offensive coordinator Mike Locksley said Tagovailoa, who also dealt with a knee injury this season, was as healthy as he has been in months.

“I thought last week we saw him healthy,” Locksley said.

Since the surgery, if Tagovailoa has not been practicing, he has been getting treatment. “The guy’s getting treatment as we’re sitting here,” Alabama head athletic trainer Jeff Allen said. “He’s got an electric stem machine hooked up and he’s also got a portable ultrasound machine that helps increase blood flow. He sleeps in a cold compression unit every night to control swelling or any soreness he might get in practice that day. Just having a plan for literally every hour.”

Alabama linebacker Christian Miller is questionable for Monday night’s College Football Playoff national championship game against No. 2 Clemson because of a pulled hamstring.

Crimson Tide coach Nick Saban said Miller has not been able to do much work in practice.

“We’ll sort of see what he can do today and sort of further evaluate his circumstance and see if he can be effective enough to contribute in a game,” Saban said.

Miller plays strong side outside linebacker, a spot where the Tide has lost several players, including Terrell Lewis. If Miller can’t play, it should open up more opportunities for senior James Mosley and freshman Eyabi Anoma. Miller is second on the team with 8 1/2 sacks.

But Scott said he doesn’t see himself leaving Clemson for another coordinator job.

Tony Elliot is the primary play caller for the Tigers, but Scott says his involvement in the offense gives him experience in that area, too.

“The way that we’re set up offensively, is really split during between Tony and myself,” he said.

Alabama QB Hurts ready to help, but mum on topic of NFL

Alabama quarterback Jalen Hurts is ready to do whatever he can to help the Crimson Tide defeat Clemson in the national championship game.

He’s not ready, however, to talk about his future at Alabama.

Hurts is a junior who started his first two seasons, but was backup to Southeastern Conference player of the year Tua Tagovailoa this season.

Hurts has stayed prepared and engaged on the bench, coming in when called on by coach Nick Saban, most notably in the SEC Championship game last month against Georgia after Tagovailoa hurt his ankle.

“I want to play as much as I can” Monday night, Hurts said.

But when asked whether he’ll remain at Alabama for his senior season, transfer or try for the NFL, Hurts quickly turned away and walked off.

Tagovailoa, a sophomore, is expected to continue as Crimson Tide quarterback, seemingly leaving little space for Hurts, who took Alabama to the national championship game in each of his first two seasons.