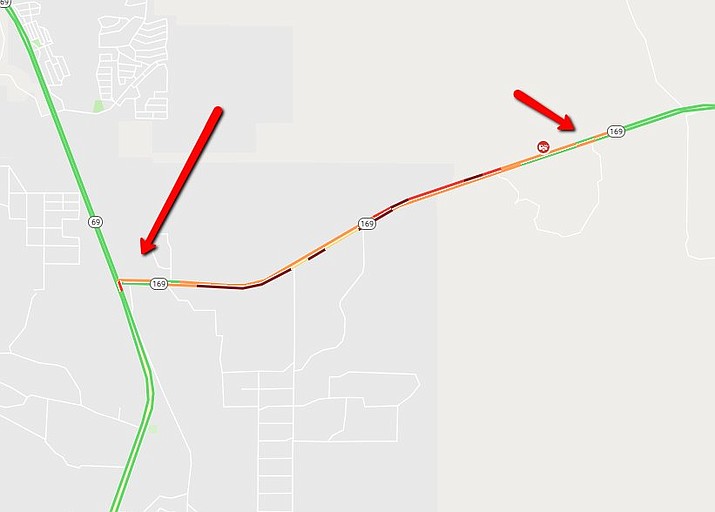 Highway 169 was closed in both directions for over an hour due to an accident near milepost 2 Wednesday evening, Jan. 2.

A five-year-old girl ended up having to be flown to Phoenix Children’s Hospital with serious injuries after a two-vehicle collision near milepost 2 on Highway 169 Wednesday evening, Jan. 2.

It was around 5 p.m. and the child was in the back seat of a Kia sedan, said Arizona Department of Public Safety (AZDPS) spokesperson Bart Graves.

The driver of the Kia was about to make a left turn when a Ford F-150 failed to slow down and rear-ended the sedan, Graves said. The child was pinned in the back seat.

“She was initially admitted to Yavapai Regional Medical Center for treatment of injuries before being transported to Phoenix Children's Hospital,” Graves said.

The driver of the truck and another passenger in the Kia were both taken to YRMC as well with minor injuries, he said.

The five-year-old’s current condition could not be obtained through AZDPS.

“Under federal law, we cannot release patient information once they are admitted to a hospital,” Graves said.

Graves was also unsure if the driver of the truck was cited for not yielding to traffic and causing a major accident.

Highway 169 was closed in both directions until about 6:30 p.m., according to Twitter posts by the Arizona Department of Transportation. Traffic was then restricted to one lane near the crash until the investigation was complete and the scene cleaned up around 8:15 p.m.