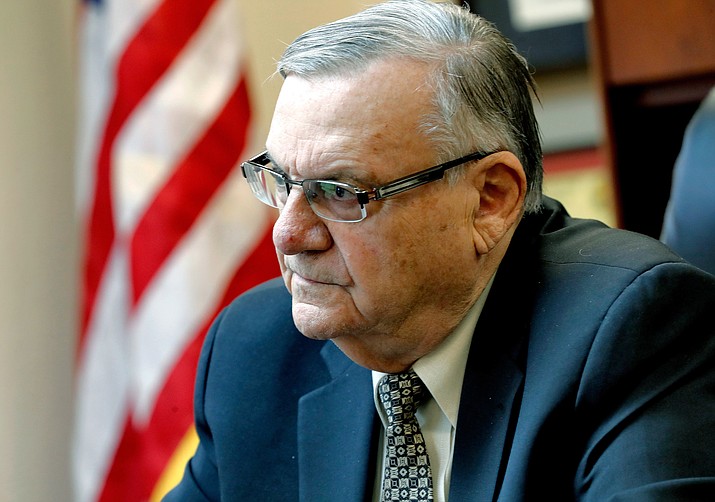 In this Jan. 10, 2018 file photo, former Maricopa County Sheriff Joe Arpaio speaks at his office in Fountain Hills, Ariz. The Justice Department won't appeal the court-ordered appointment of a special prosecutor to defend a ruling that refused to erase Arpaio's criminal record after he was pardoned. The special prosecutor's appointment came after the Justice Department refused to defend a judge's ruling that dismissed the lawman's case but refused to expunge his record. (Matt York/AP, file)

PHOENIX — The legal case of whether former Phoenix metro sheriff Joe Arpaio will still have a criminal record despite his pardon by President Donald Trump is one step closer to moving forward after the U.S. Justice Department decided not to oppose the appointment of a special prosecutor named to defend a ruling by the judge who refused to erase Arpaio's record.

The Justice Department said in a court filing Wednesday it would not ask the U.S. Supreme Court to review the appointment of the special prosecutor, clearing a key hurdle so the appeal over Arpaio's record can proceed at the 9th Circuit Court of Appeals.

But Jack Wilenchik, one of Arpaio's attorneys, said the former sheriff plans to ask the Supreme Court to review the order appointing the special prosecutor.

Arpaio, a Republican who served as Maricopa County sheriff for 24 years until his defeat in 2016, was convicted of criminal contempt of court in July 2017 for disobeying a court order to stop his traffic patrols that targeted immigrants.

The pardon by Trump spared Arpaio — an early supporter of Trump's presidential campaign — a possible jail sentence. Arpaio then tried to make a comeback as a U.S. Senate candidate but was defeated in the primary last August.

Lawyers for the Justice Department won the conviction. But after the pardon, the department sided with Arpaio, arguing that the conviction should be expunged because he was pardoned before it became final.

But U.S. District Judge Susan Bolton had refused to do so, saying that pardons don't erase convictions or the facts of cases and that the sheriff's clemency only mooted his possible punishments.

Legal advocacy groups that focus on free speech, democracy and civil rights have mounted a challenge to the pardon and asked for the appointment of a special prosecutor.