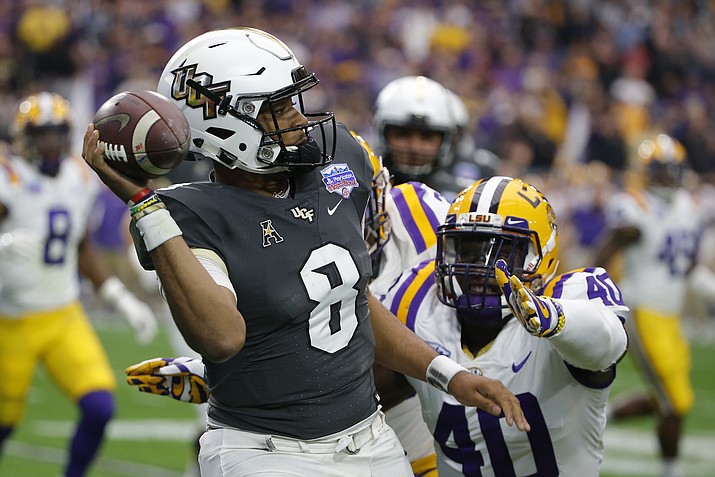 UCF quarterback Darriel Mack Jr. (8) throws the ball away while being pressured by LSU linebacker Devin White (40) in the first half during the Fiesta Bowl NCAA college football game, Tuesday, Jan. 1, 2019, in Glendale. (Rick Scuteri/AP)

GLENDALE — There will be no self-proclaimed national championship for Central Florida this year.

LSU snapped UCF’s 25-game winning streak with a 40-32 victory at the Fiesta Bowl on Tuesday, with Joe Burrow dissecting the Knights’ secondary for 394 yards passing and four touchdowns.

The seventh-ranked Knights entered as one of only three remaining unbeaten teams. The others are No. 1 Alabama and No. 2 Clemson, who meet for the national title next Monday.

UCF was never in serious consideration for a spot in the four-team playoff and was eighth in the final college football committee’s rankings. Its fans loudly claimed the system was unfair, but UCF’s defense was anything but title worthy against the Tigers.

A depleted LSU team rolled for 555 yards, easily the most allowed by the Knights this season. Burrow had touchdown passes of 22, 49, 33 and 32 yards. UCF, meanwhile, managed just 250 yards after entering the game ranked third nationally at 545 yards per game.

Darriel Mack Jr., a redshirt freshman who took over at quarterback for UCF late in the season when McKenzie Milton was injured, completed 11 of 30 passes for 97 yards.

The final score was made respectable with a UCF touchdown and two-point conversion with 2:24 to play. The Knights had one last shot from their 12-yard line, but Mack was intercepted and the fourth-longest winning streak since 2000 was over.

A year ago, UCF ended its season with a victory over Auburn in the Peach Bowl and proclaimed itself national champion as the nation’s only unbeaten team, although Alabama took home the official trophy after winning the national championship game. The Knights celebrated with a rally in downtown Orlando, a parade at Walt Disney World and a proclamation by Gov. Rick Scott.

All of that presumably would have been repeated had the Knights won in Arizona.

For a time, things looked good for UCF.

Greg McCrae scored on a 25-yard run and, moments later, Brandon Moore picked off Burrow’s ill-advised sideline pass and returned it 93 yards for a touchdown. The longest interception in Fiesta Bowl history put UCF up 14-3.

But Burrow took over, hitting Justin Jefferson with a 22-yard TD pass, Derrick Dillon for 49 yards and Jefferson again for 33 yards. LSU led 24-14 with 7:11 left in the half and never trailed again.

The Knights did mount a 10-play, 95-yard scoring drive in the final minutes of the half. Mack threw a 32-yard TD pass to Gabriel Davis with four seconds left to cut LSU’s lead to 24-21.

The Knights got a break when the Tigers muffed a punt but had to settle for Matthew Wright’s 37-yard field goal.

It didn’t help that safety Kyle Gibson was tossed in the second quarter for targeting. Then again, two LSU players were thrown out, too. The Tigers also didn’t have three cornerbacks and their best pass rusher.

Still, they had plenty for the overmatched Knights.