Preview: No. 7 UCF to face No. 11 LSU in Fiesta Bowl
College Football 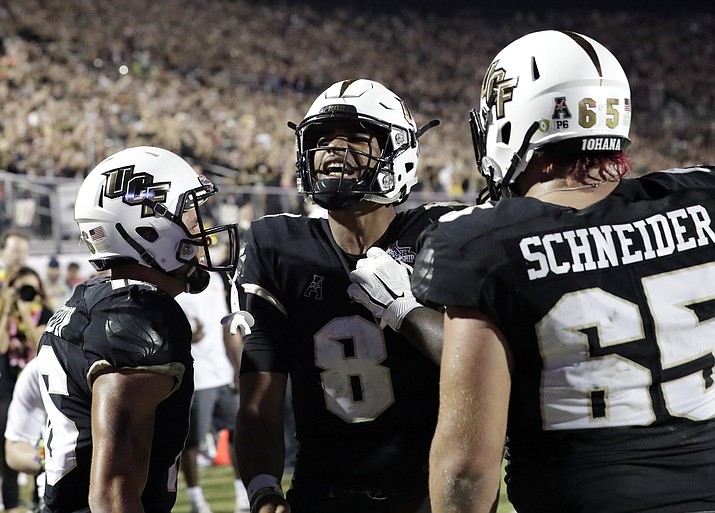 GLENDALE — Central Florida's bid for another self-proclaimed national championship goes through the desert.

Snubbed by the College Football Playoff for the second straight season, the seventh-ranked and undefeated Knights will face No. 11 LSU in the New Year's Day Fiesta Bowl.

"It's not a playoff. It's an invitational," UCF athletic director Danny White posted on Twitter on Sunday. "I'm excited to see what invitational we get to be a part of, and once again show what our team is capable of, ON THE FIELD! Proud of our team. Can't wait to go bowling with #KnightNation!!!"

UCF (12-0) finished undefeated last season and proclaimed itself national champion after beating Auburn in the Peach Bowl. The official title went to Alabama after the Crimson Tide beat Clemson in the CFP championship game.

The Knights closed out another undefeated regular season and stretched their unbeaten streak to 25 games with a 56-41 win over Memphis in Saturday's American Athletic Conference title game. The CFP selection committee tabbed Alabama, Clemson, Notre Dame and Oklahoma for this year's playoff, slotting UCF eighth in Sunday's rankings.

"Our football team was disappointed to not have the opportunity to go earn that (the CFP) on the football field, absolutely," Knights coach Josh Heupel said. "They had a feel that was going to happen, but there's great excitement to have an opportunity to go play in that game. It's very special."

UCF has not lost since the 2016 Cure Bowl against Arkansas State. The Knights first burst onto the national stage in 2014 at the Fiesta Bowl, outlasting Baylor 52-42.

LSU (9-3, No. 11 CFP) appeared to be in the CFP playoff hunt until losing to No. 22 Florida in early October. The Tigers knocked off then-No. 2 Georgia to move back into the CFP picture, but were blown out by top-ranked Alabama and lost a wild seven-overtime game to No. 21 Texas A&M to close out the regular season.

"We're highly motivated. This is where we wanted to go," LSU coach Ed Orgeron said. "When the possibilities of playing a bowl came up, our team wanted to play the Fiesta Bowl. We're not happy the way our season ended and our guys are going to be ready to play."

MISSING MILTON: UCF appeared to have endured a big blow when quarterback McKenzie Milton suffered a severe leg injury in the regular-season finale against South Florida. Milton was the two-time AAC player of the year and threw for 2,663 yards and 25 touchdowns with six interceptions. The Knights did not suffer a letdown with Darriel Mack Jr. under center in the AAC title game. He ran for four touchdowns, threw for two more and 348 yards while leading UCF back from a 17-point halftime deficit.

ORGERON'S IMPACT: LSU put together a solid third season under Orgeron. The Tigers were CFP contenders until late in the season and are headed to their first major bowl since playing Alabama in the 2011 national championship game. LSU also has a chance to win 10 games for the first time since 2013.

PROLIFIC KNIGHTS: UCF has one of the nation's most prolific offenses. The Knights are third nationally with 545.5 total yards per game, sixth in scoring at 44.2 points and in rushing with an average of 276.5 yards. UCF has scored at least 30 points in 27 straight games. Greg McCrae has rushed for 1,101 yards and nine TDs and Gabriel Davis is the Knights' leading receiver with 50 catches for 576 yards and six TDs.

TIGERS ON THE RUN: One area where LSU can exploit UCF's defense is on the ground. The Knights are among the FBS' worst defenses against the run, giving up 227.4 yards per game. LSU's Nick Brossette has rushed for 922 yards and 14 TDs, while Clyde Edwards-Helaire has gained 626 yards and seven TDs on the ground. QB Joe Burrow, who has thrown for 2,500 yards and 12 TDs, is an adept runner as well, adding seven scores rushing.