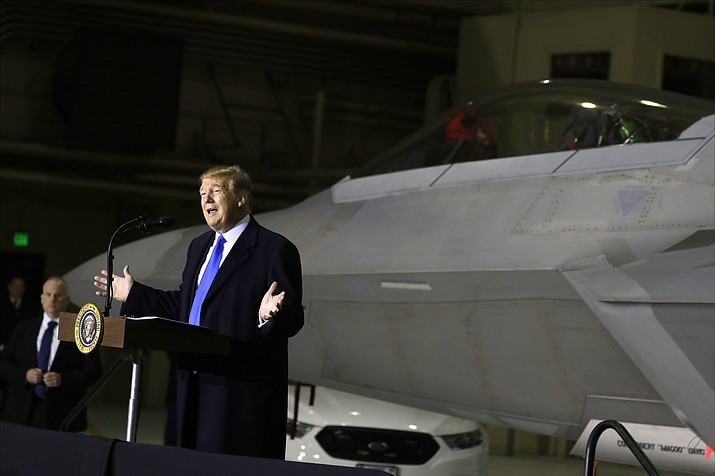 President Donald Trump speaks to service members at Joint Base Elmendorf-Richardson, Thursday, Feb. 28, 2019, in Anchorage, Alaska., during a refueling stop as he returns from Hanoi. (Evan Vucci/AP)

WASHINGTON — Senate opponents of President Donald Trump's declaration of a national emergency at the Mexican border moved within a hair Thursday of having enough votes to prevail, and one Republican suggested he could face a rejection by the GOP-led chamber if he doesn't change course.

Trump's move would "turn a border crisis into a constitutional crisis," veteran Sen. Lamar Alexander said on the Senate floor. But he stopped just short of saying he'd support a resolution blocking the president's move. Had Alexander pledged his vote, it would probably be enough for the Senate to pass a measure repealing the emergency declaration.

Speaking later to reporters, Alexander, R-Tenn., warned about what might happen if Trump doesn't settle for using other money he can access without declaring an emergency.

"He can build a wall and avoid a dangerous precedent and I hope he'll do that," Alexander said. "So that would change the voting situation if he would agree to do that."

The Democratic-led House voted Tuesday to upend Trump's move, which if left standing would let him circumvent Congress and funnel billions of extra dollars to build his proposed wall. The Senate is considering the measure.

Exactly what the Senate will vote on remains unclear. Several Republicans said that behind closed doors, they were considering several options for alternative language, including making it harder for future presidents to divert federal dollars to projects of their choosing by declaring emergencies.

Republicans say a Senate vote is likely in two weeks.

Trump has promised to veto the House-passed resolution. Congress appears all but certain to lack the two-thirds majorities in each chamber that would be needed to override his veto, but the showdown carries risks for GOP lawmakers.

Underscoring that, Trump warned Republicans against challenging him. While the wall and other Trump moves curbing immigration elicit wide public opposition, he remains wildly popular with hard-right voters and GOP lawmakers cross him at their peril.

"I really think that Republicans that vote against border security and the wall, I think you know, I've been OK at predicting things, I think they put themselves at great jeopardy," Trump said in excerpts of an interview with Fox News Channel's "Hannity" show released Thursday.

While congressional Republican are reluctant to challenge Trump, many say his move tramples Congress constitutional power to control spending. They also say it would set a precedent for future Democratic presidents to declare emergencies for their own purposes, and they worry that he would siphon money to barrier construction from home-state projects.

Alexander, a three-term senator who will retire in 2021 and is known for reaching across the aisle, has no re-election worries.

"I support what the president wants to do on border security, but not the way he has been advised to do it," said Alexander, 78. "It is unnecessary and unwise to turn a border crisis into a constitutional crisis about separation of powers."

Presidents have declared 58 national emergencies under a 1976 law. But never has one declared an emergency after Congress had explicitly denied the money in question.

GOP Sens. Susan Collins of Maine, Lisa Murkowski of Alaska and Thom Tillis of North Carolina have said they will vote to derail the emergency declaration. Just four would be needed to send the measure to Trump for his promised veto, assuming that all 47 Democrats and their independent allies vote as expected to confront the president.

By law, the resolution cannot be filibustered and would need just a majority of 51 votes to pass the Senate.

Congress has voted to limit spending for barriers to just under $1.4 billion. Trump featured the wall as a central plank of his presidential campaign and repeatedly said Mexico would pay for it, which hasn't happened.

Trump has said he needs additional barriers to halt drugs, human traffickers and unauthorized immigrants from slipping into the U.S. Opponents say there is no crisis.

Lawsuits have been filed aimed at derailing the declaration, which could at least prevent Trump from getting the extra money for months or more.

Meanwhile, Collins and three other moderate senators introduced their own resolution blocking the emergency.

The proposal is identical to the one-sentence, House-approved measure. The new legislation gives the Senate and the four centrist sponsors — two Republicans and two Democrats — a chance to put their stamp on congressional opposition to Trump's move.

The other sponsors are Sens. Tom Udall, D-N.M., Jeanne Shaheen, D-N.H., and Lisa Murkowski, R-Alaska. Only Murkowski does not face re-election next year.