Editorial: Best bet is involving all stakeholders in legislation 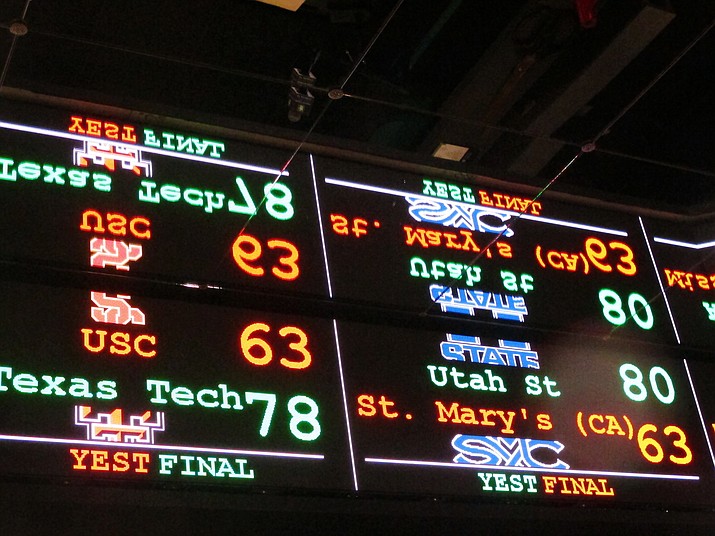 A scrolling video board with basketball scores reflected in the ceiling of the new sports book This Nov. 20, 2018, at Resorts Casino in Atlantic City, N.J. (Wayne Parry/AP, file)

State lawmakers are betting on tribes in Arizona through possible new wagering on sporting events.

And they are going about it all wrong.

The Senate Appropriations Committee advanced a measure, Senate Bill 1163, this week on a 6-3 vote to permit most tribes to take bets on professional and amateur sporting events at the casinos they operate. Add to that a provision to allow each tribe to operate off-site betting facilities at bars through remote devices or kiosks, with the state getting a share of the money wagered.

That hints at Gov. Doug Ducey’s call earlier this year for renegotiating the compacts the state signed with tribes after voters decided nearly two decades ago to give them the exclusive right to operate casinos in the state.

“The world has changed dramatically since the year 2000,’’ he told Capitol Media Services, adding there’s an opportunity for both the state and the tribes to benefit financially from changes.

However, our look back at anything involving gaming, betting, Native American tribes in Arizona, and compacts negotiated by the state shows that one of the seats at the table must always be occupied by the tribes.

SB 1163 was crafted without the tribes’ involvement — and, no surprise, they are none too happy about it.

It is not about sports betting, it is not about off-site betting, nor is it about who gets what. It is all about asking the tribes to be part of the process.

If you were to craft legislation to ultimately benefit any one population or segment of society — for changes in zoning, disability coverage or allowances, taxes, forest thinning, fire and medical, public safety, whatever it is – stakeholders should always be consulted or involved.

“We were not consulted,’’ Tohono O’odham Chairman Edward Manuel said.

Steve Titla, speaking for the San Carlos Apache tribe, said any radical change should be part of the negotiations among all the tribes and state officials for a new gaming compact, not something imposed by the Legislature.

Sen. Sonny Borrelli, R-Lake Havasu City, who is spearheading this bill, counters that even if the measure were to pass, tribes would retain the right to opt in — or not.

Had Borrelli talked with the tribes, he would have learned concerns exist even with the off-site locations. “We do not support expanded gaming in bars and restaurants, which could result in mini-casinos across the state,’’ said Larry Jackson, vice chair of the Yavapai-Apache Nation.

They see this as ultimately harming the on-reservation casinos.

While Tuesday’s vote sends the measure to the full Senate, any legislation should be vetted with anyone it may affect — beforehand.