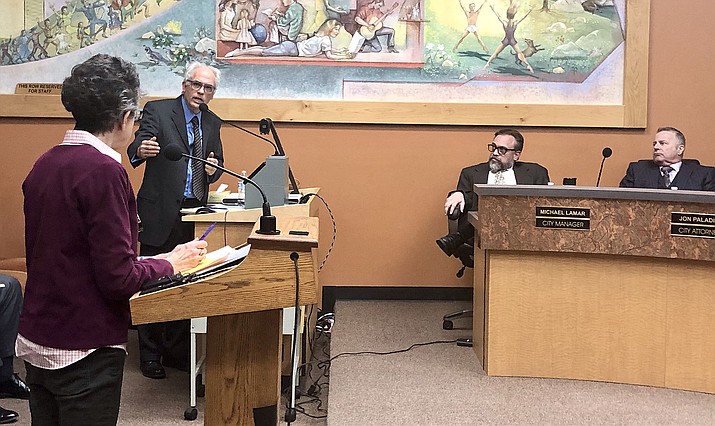 How urgent is the Big Chino Water Pipeline?

Based on information from an independent water expert this week, Prescott officials say the answer to that long-debated question could be changing.

With the community’s annual water-usage totals going down, they say, the importation of water from the Paulden-area aquifer might not be as pressing as originally thought.

About 40 members of the public turned out at Prescott City Hall on Tuesday evening, Feb. 26, for a presentation by water expert Gary Woodard on Prescott’s water portfolio.

The meeting was a study session, and no decisions were made. City officials stressed that the findings are preliminary at this point, and a final report will be coming in the next month or so.

WATER USE IS DOWN

Still, they say Woodard’s data showing a steady reduction in the amount of water used by the community over the past 15 years — even as the city’s population has been gradually increasing – could push off the need for the Big Chino Pipeline.

Among the main points in Woodard’s presentation was that in many Arizona communities, including Prescott, the amount of water being used has been “decoupled” from population increases.

He attributed that, in part, to conservation measures and more efficient toilets and appliances.

“Water production has declined an average of 143 acre-feet per year (in Prescott), which is about 2 percent per year over the last 14 years,” Woodard’s presentation stated.

At the same time, the number of housing units in the city has been gradually increasing.

That trend raised questions among some council members and audience members about the level of need for imported water.

Mayor Pro Tem Billie Orr said Woodard’s information changes her perception on the need for the Big Chino Pipeline, which has been discussed for years as a way to augment Prescott’s water supply.

“We’ve talked for many years now about the Big Chino Pipeline, and how much that’s going to cost us,” Orr said, adding that the pipeline’s timeline might need to be adjusted.

Although Orr called the city’s ownership (along with its partner, Prescott Valley) of property in the Big Chino Basin “a great insurance policy,” she said: “Now, I’m not so sure that we need — not that that we don’t need to have it one day — but certainly not now.”

For years, officials have eyed 2025 as the year that the imported water from the pipeline would be needed.

Mayor Greg Mengarelli led off Tuesday’s discussion by explaining that the city sought an independent analysis to offer council members a better understanding of the water holdings.

“For me, I did not have a great handle on our water portfolio,” Mengarelli told the audience. Statistics that showed Prescott’s water use dropping from about 8,100 acre-feet in 2004 to about 6,800 acre-feet in 2017 raised a question for Mengarelli: “How could this be, despite a 1 to 2 percent population growth?”

City Manager Michael Lamar said he reached out to Woodard, who said such trends are consistent in other communities as well.

Lamar said he authorized a $25,000 contract with Woodard to analyze the city’s water situation. The findings will be a key part in what Lamar said would be a “wholesale review of how the city manages and tracks its water.”

Although several members of the audience voiced support for the findings of the analysis, local water-conservation advocate Leslie Hoy questioned Woodard about the long-term impacts.

“Ultimately, are we trying to save water? What is the bottom line here?” Hoy asked. “If we just tell the public we’re using less water, then in 15 years, will we still be using less water?”

Woodard responded that he had not seen a reversal of conservation measures in other communities with similar findings.

“No one’s acted like they just won the water lottery,” he said. “I haven’t seen a community that suddenly thought, ‘let’s all put grass in our front yards again.’”

In particular, he mentioned the city’s ability to withdraw water from Willow and Watson lakes to recharge its aquifer.

“Getting those reservoirs was a really good move,” Woodard said.

Councilman Steve Blair said Woodard’s findings show “that we have the water, without running out of water. As far as I’m concerned, I’m very pleased with what I’m hearing.”

Lamar said Tuesday’s meeting would be the first in a series of meetings on water. The Feb. 26 meeting was recorded by the Prescott Media Center is available for viewing online at: https://www.facebook.com/prescottmediacenter/videos/ 359840414607118/?t=3857.