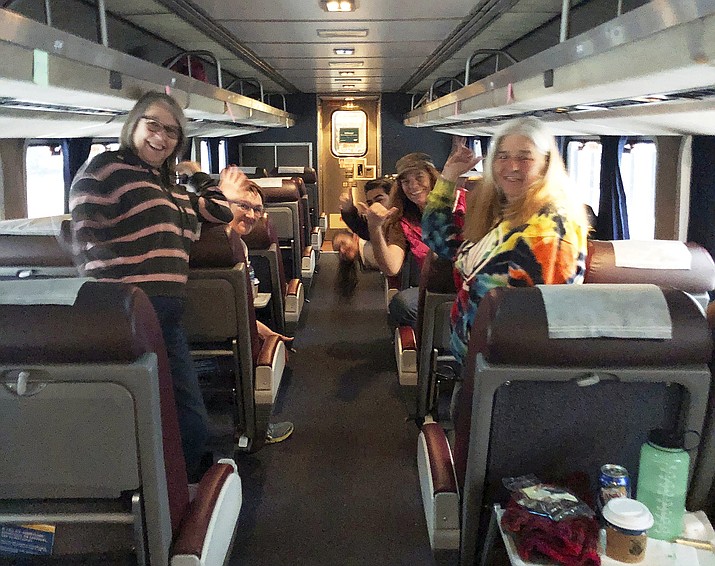 This photo provided by Emilie Wyrick shows passengers aboard a stranded Amtrak train making the best of their situation after the train hit downed trees during a blizzard in the Oregon mountains and was stopped for a day and a half, seen early Tuesday, Feb. 26, 2019. During the 36 hours that the train was stuck, younger passengers helped older ones reach their families to let them know they were all right. The trouble began Sunday evening, when the double-decker Coast Starlight train struck a tree that had fallen onto the tracks, Amtrak said. (Emilie Wyrick via AP)

Train stranded in Oregon snow with 183 passengers by Associated Press

SALEM, Ore. (AP) — An Amtrak train with almost 200 people aboard hit downed trees during a blizzard and got stranded in the Oregon mountains for a day and a half, but passengers and crew banded together during the ordeal that ended Tuesday.

“It was really nice to meet people pulling together,” passenger Tracy Rhodes, of Scottsdale, Arizona, said in a phone interview after the train that had been traveling from Seattle to Los Angeles rolled back into the college town of Eugene, Oregon, with a clanging bell announcing its arrival. Passengers spilled out, some waving their arms high in jubilation.

The view from an Amtrak train after it hit downed trees during a blizzard in the Oregon mountains and got stranded for a day and a half, seen early Tuesday, Feb. 26, 2019. (Emilie Wyrick via AP)

During the 36 hours that the train was stuck, younger passengers helped older ones reach their families to let them know they were all right, said Rhodes, who was traveling with her brother to visit their 82-year-old mother in Klamath Falls, Oregon. A “mom brigade” was formed to take care of and entertain the children, she said.

“People were being very kind to each other, being friends,” Rhodes said. “It restores your faith.”

The trouble began Sunday evening, when the double-decker Coast Starlight train struck a tree that had fallen onto the tracks, Amtrak said.

Rhodes said the train stopped suddenly but not violently. She was told the engine hit several snow-laden trees and that one snapped back, damaging a hose assembly providing air pressure for the brakes. The train was repaired enough to move forward a short distance to Oakridge, Oregon, a town 1,200 feet (366 meters) high in the Cascade Range that was dealing with its own problems — a blackout and snow and debris-covered roads.

Railroad officials decided to keep the passengers on board instead of letting them into the town of 3,200 people. The hours ticked by. Some passengers grew impatient.

“This is hell and it’s getting worse,” Rebekah Dodson posted on Facebook after 30 hours, along with photos of herself and other passengers smiling into the camera.

The train with 183 passengers still had electricity, heat and food. Some people took the long unscheduled stop with a sense of humor.

“The food hoarding has begun. I’m considering saving half my dinner steak and making jerky on the room heater,” Rhodes tweeted. She and her brother had sleeping berths.

“We were fed very well. Steak at night, hot breakfast in the morning,” she said. Coach passengers were given beef stew with mashed potatoes, she noted.

This self-portrait by Emilie Wyrick shows her aboard a stranded Amtrak train making the best of the situation after the train hit downed trees during a blizzard in the Oregon mountains and stopped for a day and a half, seen early Tuesday, Feb. 26, 2019. (Emilie Wyrick via AP)

To pass the time, Rhodes and her brother browsed the internet and played war, speed and cribbage with cards they bought in the cafe. Others sent images and video of passengers gazing out the window at the snowy landscape or napping to social media.

“With more than a foot of heavy snow and numerous trees blocking the track, we made every decision in the best interest of the safety of our customers,” Naparstek said, adding that customers would get refunds and other compensation.

Amtrak spokeswoman Olivia Irvin said weather and track obstructions remained an issue and that the Coast Starlight would run only south of Sacramento until Friday.

The crew of 13 dealt with the situation as best they could. With diapers running short, a worker in the cafe improvised with napkins and safety pins, Rhodes said.

“People were great. The train crew was amazing,” said Marsha Trujillo, from Martinez, California. “They were so professional and so kind. We really wanted for nothing except for maybe someplace comfortable to lie down, and a shower.”

The Coast Starlight bills itself on the Amtrak website as “a grand West Coast train adventure.”

In this case, however, nature trumped modern human conveyances.

After the train began moving again Tuesday, Dodson posted a video on Facebook admiring the view.

Tracy Rhodes sitting in the roomette sleeper car she shared with her brother inside an Amtrak train that was stuck for 36 hours in Oakridge, Ore. (Tracy Rhodes via AP)

“We are moving and it’s totally awesome,” she said as trees laden with snow swept past a window. “Isn’t it beautiful? I’m so excited.”

Carly Bigby, a teacher aboard the train, had been visiting Eugene with her fiance and was trying to figure out how to get back home to Klamath Falls.

“I am exhausted,” she told KOIN, a Portland TV station.

The highway to Klamath Falls was snowbound and impassable. With no way to reach her mother, Rhodes planned to fly home to Arizona.

“She is definitely disappointed, but is glad we’re safe,” she said.

The train retreated to the north Tuesday afternoon, heading back to Seattle. Some passengers including Rhodes got off in Portland. The train’s journey further north was delayed for at least two hours, passengers were told, after a railroad bridge over the Columbia River between Oregon and Washington state caught fire.